Well, here we are talking about Salix caprea 'Kilmarnock' again: this time, a dwarf version.

A while back, a nice lady called Sally sent me some pictures of her tiny Kilmarnock, with a question about pruning, and why it hadn't grown any taller.

I've done several articles about this particular tree: it's very popular, but it's not a "normal" tree, it's a very specialised type of tree where the nursery takes one type of willow - a weeping form, whose branches droop decorously and languidly downwards - and graft it onto the trunk of a normal upright willow.  Why? Two reasons; the weeping type of willow is HUGE: and secondly, they take many, many years to reach a size where they weep properly.

And most people don't want a HUGE willow tree, they want something small and manageable, hence the grafted tree.

The nurseries can choose how high up the trunk to set the grafts, so they can dictate the height of the tree: the idea is that the main trunk never grows any higher, so the tree never outgrows the garden.

But the branches do continue to grow (because they think they belong to a tree which is 60' off the ground) and this can lead to confusion, and to armadilloes crawling into the shrubbery. (see link for explanation!) 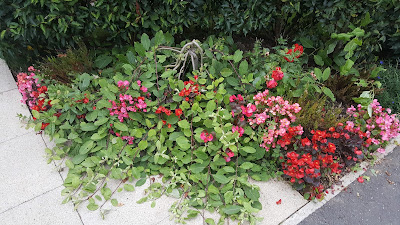 As you can see, it's been planted as a feature at the edge of a small bed, surrounded by a colourful mix of what look like Begonias etc.

Frankly, it's a bit lost. 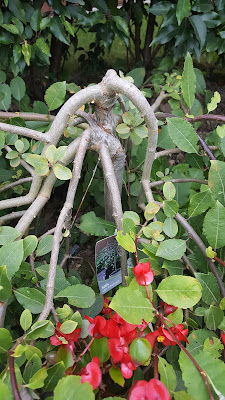 And as you can see in the photo above, the branches of the tree are so long that they are crawling across the paving.

Sally was concerned because she wanted to prune it -  understandably, not too keen on the whole crawling-across-the-paving look - but wasn't quite sure how, and didn't want to make it any shorter than it already is, as she was a bit disappointed that it wasn't making as much of a feature as she had hoped for.

Here's a close-up - right - of the top part, showing how the grafted weeping branches curl straight over and head for the ground.

You can also see the label, which describes it as growing to 1m high. That's only a little over 3', so actually the tree is doing exactly what it should be doing.

However, please note the picture on the label:

Not a very clear picture, but you can see that the seller has presented the plant as being in a pot, all alone, with the stem clearly visible and nothing else around it.

My advice to Sally, therefore, was that she should consider digging up the little tree and putting it in a large, decorative pot, in order to see the true beauty of it.

She could also consider putting the pot on a stand or a pedestal of some kind, to give extra height, and to bring the flowering portion of the tree up to eye height, instead of being down there at knee level.

She will then be able to carry out the "under-pruning" which I describe in detail in the armadillo article, which should leave her with a feature tree that looks very much like the one on the label.

Instead of looking like an armadillo crawling off into the hedge!

Posted by Rachel the Gardener at 10:17