How to manage Opium Poppy - Papaver somniferum - in the garden

I love the huge annual Opium Poppies - Papaver somniferum - and in one of my gardens, I have a large swathe of them across a small area which we laughingly call the Wildflower Garden.

I sowed them from seed earlier this year, they've done tremendously well, but now: 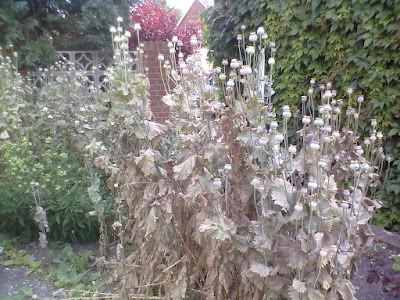 well. they're not so pretty anymore, are they?  This means that it's time to pull them out.

However, before I do that, I'm going to collect some of the seed so that I can re-sow for next year, and also so that I can sow them in another part of the garden.

This is something I do every year, with many plants, but someone asked me about it the other day, which made me realise that the phrase "just collect some seeds your annual poppies" is not quite enough detail.

So what do you do, if  you want to save seed?

A large paper bag, or an old used large paper envelope - A4 is fine, and it doesn't matter if it has a clear window in it.

Somewhere warm and dry to hang them.

Right, here's How To Do It: Cut down the stems, quite low down, and tie them together in loose bunches. Pull the paper envelope or bag over the seed pods, and tie it around the stems.  Then hang the whole contraption, upside down, somewhere warm such as a shed or a garage, or a sunny porch. As the seed pods dry and ripen, the seeds will fall out and will be caught in the envelope.

However, how do you know if the ones you are picking still have any seed left in them? Answer, look closely at the seed pod, just under the flat lid, to see if you've left it too late. It's not the colour you are looking for, it's whether the pod has opened or not. 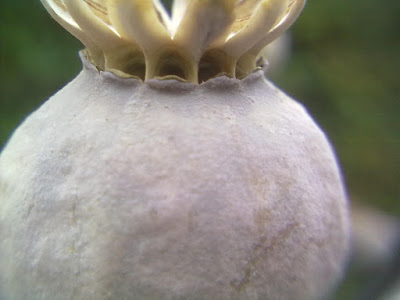 Here's one which has opened - can you see those chutes, or flutes, just under the upturned lid? That's how the seed gets distributed: the wind blows the stems around, which shakes the head, and the tiny black seeds come out of those chutes.

When the stem eventually breaks, the seed pod will end up hanging upside down, and any remaining seeds will then fall  out. 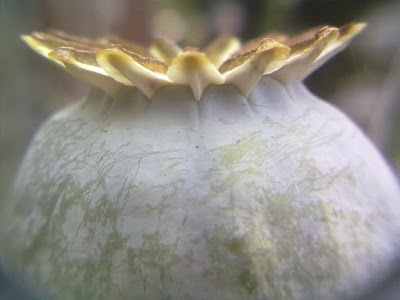 Here is one which is unripe: can you see how there are no holes, no chutes: no way for the seed to get  out.

This is the sort of seed pod that you want to select, and the fatter it is, the better.

If you wait until the seed pod goes brown, you will probably lose most of the seed, so it's better to pick them while they are still fairly green and - importantly - still sealed up.

They don't take long to dry, maybe a couple of weeks, but it doesn't matter if you forget about them and they stay there in the shed until next year: the seed will fall out, and will be collected by the envelope.

It's always a good idea to write on the envelope the date, the name of the plant, and what colour the flowers were - otherwise you'll forget, and then you'll end up with a box in the shed filled with envelopes of mysterious seeds....

Then, next spring, you can scatter the seed wherever you would like Poppies to appear, and there you go! Easy peasy!

Now, before we leave the subject, I might as well add a quick comment about the final aspect of this: how to clear up the rest of the mess.

Once you have harvested the best pods for drying and seed-saving,  what is the best thing to do with the rest? 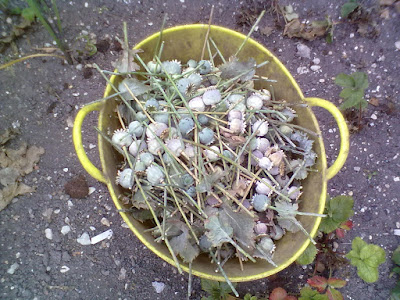 Firstly, go round again and chop off all the old seed heads, collecting them as you go - here's a bucketfull that I collected from the garden above.

These are the ones which are already open, are partially open, or are not plump enough to be worth saving.  I always cut them off first because this material goes on the bonfire heap (or in the council green-waste bin if you don't have a bonfire). I don't want this stuff on the compost heap, as it contains a lot of seeds - duuuh, obviously!! - and I don't want little poppies pop-pop-popping up everywhere I use the compost.

Also, and less obviously, I don't want to have a constant shower of tiny poppy seeds down the back of my neck and in my ears while I am removing the rest of the foliage...

... so I cut off the seed heads and dispose of them, then I go round again and pull out the remainder of the plants, which can then go on the compost heap.

Simple. Of course, the garden always looks a bit bare when you've just done it... but you might well find that removing the old poppies reveals a few late starters, young plants which will flower in the next couple of weeks, to remind you of how lovely they were!

Posted by Rachel the Gardener at 09:44