For years I've been recommending Gold Leaf gloves, and in particular the Winter Touch ones: they are waterproof, thermal, and yet thin enough to work in. They're not cheap, at £25 a pair, but well worth it.

Or at least, I thought so, until this year, when I had a bit of a hiccup.

Now, I go through my gloves in the same place each time - the tips of the fingers on my left hand, usually the first or second finger. It's annoying to wear out always the same glove, and I have a large box full of right-hand orphans, in the hopes that one day I'll meet a fellow gardener who wears out her right-hand gloves, and we can come to some arrangement... 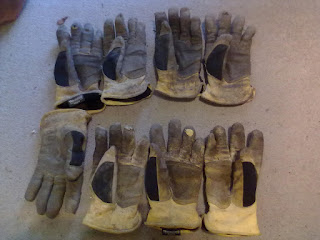 Here's my current left-hand (ie worn out) glove collection, from last winter: I know, I know, why do I keep them? I don't really know.

I've tried mending them, by cutting off the outer layer of a "good" finger and stitching it over a damaged finger - yes, these gloves are THAT good, it's worth trying to extend their life - but it was never successful, and usually the new finger would fall off after a day or two, or it would feel so lumpy and clumsy that I would just go out and buy a new pair.

But then there was this pair, from the very end of last winter: 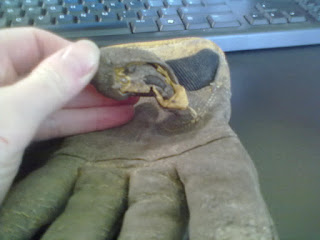 This time, they came apart at the seam down the inside of the thumb.

Why couldn't it have been the right hand glove? Why! Why! I have a dozen spare rights! But no, it had to be the left hand that went, curses.

Unfortunately, I'd bought them as part of a batch a couple of months earlier, so although I'd only used them a few times, the receipt was several months old, and the shop were not interested in replacing them.

They were thrown into the "Dead Gloves" box at the time, and have remained there ever since, and no, I haven't bought gloves from that particular garden centre again.

As they were my last pair, I rushed over to a different garden centre, and bought a new pair. Within just a week or two, they'd gone through at the fingers, but on the RIGHT hand, so I took them back and complained, taking along a couple of pairs of my older ones to show that I always wore out the left hand, not the right, and that therefore there must be something wrong with their quality.

The garden centre manager agreed, and replaced them.

By then, it was spring, and too warm to need them, so the new pair went straight into the cupboard.

Earlier this month, out they came, and off to work we went: it's always a proud moment, the first day of wearing beautiful brand new yellow gloves. They don't stay that way for long... 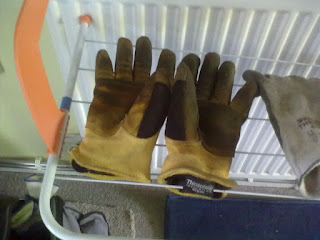 Day One: 11th October. They got quite wet, so here they are drying on the radiator rack along with the Showa Thermos. 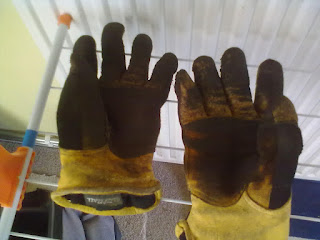 Day Two: 12th October, drying on the rack again after a second day of wetness and mud. 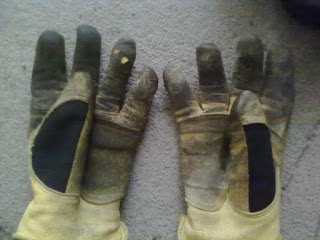 Day Three: 19th Oct. 19th? Yes, they aren't needed every day, and they are sufficiently expensive that I don't wear them unless I actually need them! 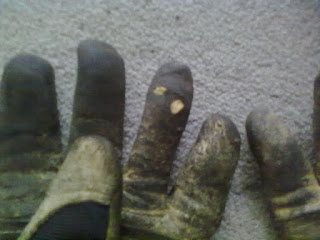 Horrors! On their third day of wearing, there are already holes!!

Please note this is in the third finger, which is quite unusual - mostly, I go through the first and second fingers. 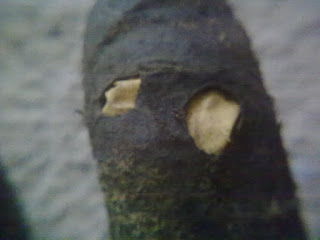 Here's a gruesome close-up of the damage: not rips or tears, I should stress, they are simply worn through.

And I wasn't even working particularly hard! 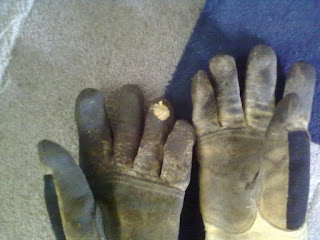 Alas, having no others, I had to wear them again two days later, so this is Day Four of wear, 21st Oct. The two little holes have now combined into one big one, and these gloves are now in the Dead Gloves box.

I contacted Gold Leaf, and I'm happy to tell you that I received a very full and informative response from Kelly Cooney, one of the owners: they have assured me that there has not been any lowering of standards, and that they are very concerned about the problems I have had.

They sent me a postage-paid label, so I could return these ones, and the pair where the thumb seam ripped (it was tempting to send them back the entirety of my Dead Gloves Box but that would have been a bit unfair!) and they duly replaced them, which is excellent news.

Even better news, they have a new style of glove, a cotton one with double-dipped fingers, and they have sent me a pair to trial and report back on: I've started using them, but now the weather has turned suddenly cold, they've been put on hold for a while, but  I will add a link to the Product Review for these new gloves, once I've assessed them.

Kelly took the trouble to point out that Gold Leaf do a whole range of gloves for different conditions, and of course I already know that: I have a pair of their Dry Touch, which are as waterproof as the Winter Touch but don't have the super Thinsulate lining, so they were intended to be worn on the many wet days when it was too mild to wear the full-on super-warm Winter Touch. I wore them a couple of times during the summer, but not enough to review them properly. Watch this space, I'll review them next year, and I'll come back to this post and put in a link, when I do.

Additionally - as I said, it was a very full email! - Kelly mentioned that another customer has successfully wrapped duct tape around the worn-out fingers to extend their use: this sounds a lot quicker and easier than trying to transplant an entire glove-finger, and somewhat less Frankensteiny, so I might well give that a go.

As I said above, these gloves are just so good to work in, that it's worth trying to extend their life!

And in the meantime, if anyone out there wears these gloves, and always goes through their right-hand glove first... get in touch!

Posted by Rachel the Gardener at 09:51