How to keep ivy out, from beyond your garden

This is such a common problem: you work and strive to make your own garden or land nice, and then you are invaded by unwanted plants from next door.

What can you do?

If someone lives next door, your first step - before it really starts to wind you up - is to walk round and tap on their door. Introduce yourself, say that you realise they might not be aware of it, but their ivy (or bindweed or willowherb seeds or overhanging trees, or whatever the problem is) is causing you difficulties, and would they be kind enough to do something about it from their side.

I wrote about this a while back, in answer to a question about invading Brambles, and I said then that 90% of the time, the neighbour is surprised and then horrified to learn that their plants are being a nuisance, and usually they will be happy to sort out their side.  Sometimes, it can help if you offer to go round to their side and help them with the work (while cunningly leaving them responsible for disposing of the waste material, mwaah haa haa!) especially things like brambles and overhanging trees, where it really is so much easier to sort them out from the side on which they grow.

However, what if there is no-one next door - if the land is derelict, or public land? This was the case in the article mentioned above, and it goes for ivy as well: the only real answer is to get on the other side of your boundary, and attack it from there.

I have a Client with this exact problem: the back of their garden adjoins a very steep slope of land running down to a road, and the land is presumably owned by the council. Needless to say, the council don't do any sort of maintenance at all, and the top of this bank is infested with brambles, and has a lovely underplanting of ivy.

Last year - my first winter in this garden - I clambered round the back of the fence, and hacked off all the brambles for about a yard clear of my Client's fence. This allowed me to then loosen and pull back all the ground-covering ivy for the same distance, which gave me access all the way along the back of the fence, and meant that I was able to dig out any ivy that had rooted on "our" side of it.

It was too big a task to try to get rid of the ivy beyond the fence altogether, so I used what I call the "Hydra" technique: if you cut ivy (or brambles, for that matter) the cut end will sprout two or more new shoots, which are usually more vigorous than the original. If you cut these, then each cut will again sprout more than one shoot so you get four or five of them, and if you cut these .. you get the idea. Instead, I pull up the loose length of the ivy (or bramble) and fold it back on itself, so that it can continue to grow as just one shoot, instead of many, but it will continue to grow away from the fence.

Of course, if the reason the ivy was heading for the fence was to get more light, or just single-minded determination to go uphill, then it will end up heading back this way, but by tossing three- and four-foot long streamers of the stuff back down the slope, I could delay its return. 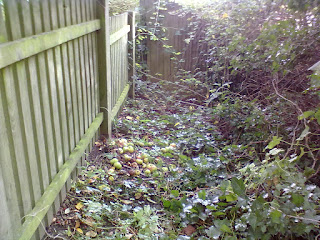 Here's what it looked like last week - not too bad, all things considered.

In this photo I am halfway through through the job, as I have already dealt with the brambles: I folded back as much of them as I could get to, and chopped off any dead brown bramble stems (which won't regrow) as far to the right as I could reach.

Now I have to tackle the ivy - as you can see, it has regrown all over the area, but not that thickly, and when I came to them, I found that they were mostly long "loose" strands, barely rooted into the soil. This meant it was a comparatively quick job to heave them up without snapping them off, and toss them over to the right, downhill. Wherever possible I would pull up the roots, but I didn't spend much time on it, as I have the whole of the main garden to attend to! 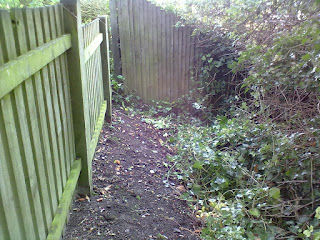 Here is the result: a clear exclusion zone, no ivy growing, no brambles leaning across: plenty of daylight for the back of "our" side, to help our planting to grow well, and by allowing light and air to the back of the fence, it reduces dampness, mould and fungal growth, which helps the fence to last longer. Best of all, there are now no brambles grabbing at me, as I carry out routine maintenance on "our" side.

So there you have it, a simple exclusion zone, invisible to anyone else, nothing for the council or nosy neighbours to complain about, and it also *looks over shoulder to see if anyone is listening* means that if the bare zone should be invaded by nettles, or willowherb, or anything of that type, I can - if I choose - easily spray weedkiller over the fence, without having to scramble round the back.
Posted by Rachel the Gardener at 10:10