Brambles: The Next Generation (weedkiller)

I had a very nice email from a lady called Shelagh the other day, asking a couple of questions about bramble removal, and rather than add to the length of the original Bramble Removal: How To Do It article I decided it would be more efficient to start a new one.

This is, of course, in addition to these articles:

Brambles: Part 7: The Right Tool For The Job. Secateurs, mostly. "Part 7" is a bit of an exaggeration!
Bramble Removal: Invaders from Next Door deals with this particular issue, and...
What Shrubs Can Hold Brambles Back  which was an interesting question.

As I have said in the other articles, the first task is always to cut off and remove the top growth: you can't do anything when you are being slashed to ribbons every time you turn around, and mindlessly spraying the whole area with weedkiller will just turn the green prickly growth into brown prickly growth.

It doesn't matter where you start from, just put on some thick gloves, stand there and start chopping the long growth in front of your face: cut it into short sections, using secateurs, or loppers if the stems are too big to cut easily.

Once your face is safe, start to cut downwards and sideways until you have cleared a small space. Then extend that space in all directions. This task is way, way easier if there are two of  you: one can chop, the other can rake away the short sections ready for burning or disposal.

Aim to leave the brambles with short ankle-height stumps: any shorter and you will be forever tripping over them... if they keep catching on your socks, cut most of the stump down to ground level, leaving just one or two upright stumps so you can see where they are.

If digging them out is not an option, we come to weedkiller. As I keep on saying, I am not a big fan of weedkiller but there are some situations where it is the only realistic option, if you don't have the time or the energy to dig out every single root.

As you might have read in my other bramble articles, brambles are sneaky in that the growing point is an inch or two below soil level - most people either chop off just the bit above ground, and are horrified when they immediately grow back: or they spend months trying to excavate the long, deep roots, when all they needed to do was get out the top couple of inches.

Removing them with a mattock is a good compromise, but can be enormously hard work, especially in mid-summer, after weeks of scorching sun. *pause while I gaze out of the streaming window at the torrential rain currently falling on South Oxfordshire.* It has been suggested that pigs are the perfect eco-answer, as they root around with their noses, diligently uprooting every plant in the top 6" of soil, leaving a soft tilth, ready fertilised.

However, this is massively impractical for 99.99999999% of us, who don't have pigs, don't know anyone who would lend us a couple, and don't have enough acreage to make it worth while anyway. Or who have neighbours who might well view piggies as less of a bramble-removing tool, and more of a sort of walking uncooked breakfast.

So where does that leave us? With weedkiller.

Yes, I know that chemicals are "bad" for the soil, the environment, the bees, and for us. However, needs must when the devil drives, and brambles do cause the devil to drive particularly hard. (As an aside, did you know that the expression "needs must when the devil drives" is actually older than the USA? John Lydgate’s Assembly of Gods, written about 1420 says: “He must nedys go that the deuell dryves” which is very much the same expression used by Shakespeare some time later. Since then, it has been corrupted into the modern form, but the meaning is still clear: when the devil is driving you, ie when you have no choice, you gotta do what you gotta do. End of diversion, please drive on.)

In my opinion, the best and only chemical to use is a Glyphosate-based herbicide.

Herbicide means "kills herbaceous material" by the way,  ie weeds, grass, flowers, everything with green leaves that dies down in winter: we tend to call it a Weedkiller, but that is a loose use of the word, as it will kill precious plants just as thoroughly as it will kill weeds.

Which weedkiller should I buy?  Read the packet, buy one whose active ingredient is Glyphosate. You don't need a combined weedkiller, you don't need a super-fast "kills in 24 hours" product, just use good old Glyphosate. Buy it in undiluted form, otherwise you are paying several pounds for a one-use spray bottle and a lot of water: and don't buy "handy" sachets or tiny tubes, as they are incredibly wasteful and over-packaged - keep looking  until you find a pack containing a simple bottle of the product. 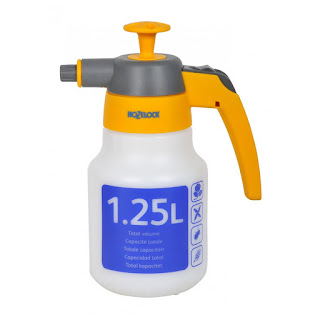 The brand name used to be Roundup, but now it is out of patent protection, you can buy it a lot cheaper as an own-brand product from Homebase and B&Q. If you have a lot of brambles to deal with, buy it in concentrated format, and buy a pressure sprayer.

This (left) is the best type of small sprayer: you dilute your herbicide as per instructions, screw on the lid quite tightly, then pump the plunger up and down until you feel resistance. Then you just hold the trigger down to spray.

As the level of liquid inside falls, you have to pump again, but it's very easy to do.

You can adjust the spray by twisting the nozzle where the liquid emerges: it is always best to spray on still days to avoid the spray drifting onto precious plants, but if you have to spray on slightly windy days, you can twist the nozzle to make the spray coarser, or wetter, so that it doesn't drift.

If you have a large area, then you might prefer the next size up, which has a shoulder-strap and is easier to carry.

Whatever sort you get, either buy a red one, or write "POISON" in big letters on it in felt pen. Even though you rinse it out well after use (you will rinse it out, won't you?) you should always keep the weedkiller spray equipment separate from other garden sprays.

How does it work?  Glyphosate is a translocated herbicide. You spray it onto the leaves, it is soaked up by the leaves and works its way back down the stems to the roots. It works as a hormone, so when it reaches the roots, it "tells" the plant to grow, and grow, and grow.. the plant then exhausts itself by over-growing, keels over and dies completely, roots and all.

How long does it take to work? Check the pack - it takes about 2-3 weeks. At first there will be little change, and you will think it hasn't worked. Then the plant will grow massively, and you will think that not only has it not worked, it has somehow encouraged the plant. This is not true - look closely, you will often see that the plant is growing contorted and pale, as it is being forced to grow so much more than is healthy. Then, finally, it will die.

Shall I dilute it less than it says on the pack, so that it's stronger? No! No! And thrice, no! If you make it up to be too strong, it will kill the plant tissues too quickly, before it reaches the roots, so the top part will die off but the weed will grow again from the root. Follow the instructions exactly.

Shall I dilute it more than it says on the pack, so that it will go further?  No - if you dilute it too much, it won't have the desired effect, and you will end up having to spray again. Just follow the instructions on the pack.

Can I use it at any time of year? No - again, check the pack, it specifies the temperature range at which it is most effective. In easy terms, it works best in summer and autumn, and it doesn't work particularly well if it about to rain, as the rain will wash it off the leaves before it is absorbed into the leaf. Thus you are wasting your expensive chemical.

Will it poison the soil? If used correctly, no. Glyphosate is one of the few herbicides that does not poison the soil. The packs state that it is "inactivated on contact with the soil". However, this does not mean that it is beneficial to the soil, so use it with restraint.

If you use your Glyphosate correctly diluted, applied on a sufficiently warm, still, day, then after 2-3 weeks you should see real results, as the plants die off.

Of course, this is not the end of the story: those roots are now dead, but they are still going to be in the way when you want to cultivate the soil. You can leave them to rot down over time if it is rough ground, but if it's a garden bed or an allotment area, then you might find that you have to pull out the dead roots anyway - but at least if they are dead, they should be a lot easier to pull out than when they were alive.

And of course you must keep going over your de-brambled patch, at least once a month, checking for new growth that might have been missed, and "spritzing" any new leaves that you find with Glyphosate.  Even after a year or more, you will still find tiny seedlings, because the ground is going to be full of seeds - ie pips - which will continue to germinate for many years to come.

But a newly germinating seedling is a teeny tiny thing, easy to pull out without even needing gloves, as they don't start getting prickly until they are an inch or two high. And you will soon learn to recognise them! If in any doubt, take a photo of the tiny seedling, put a label or a marker by it, and keep going back to check and take a new photo every week. Whatever it turns out to be, you will have a photographic record of how it started, so you will be able to recognise it in the future.

Well, I hope you enjoyed learning about weedkiller and brambles: I have a special treat in store for  you over the next few weeks, I have been shown a steep bank which is absolutely smothered in brambles, and I will do my best to take photos at various steps of the project, to share with you once it's done..
Posted by Rachel the Gardener at 15:29