This is one of my favourite types of project - reshaping a hedge.

Recently I was asked to shape up a long line of individual Box plants, which I really enjoyed doing, and in a similar but simpler vein, I was asked by a different Client to change a plain box hedge.

It has been a simple thigh-high block for many years, it screens a brick wall which my Client dislikes (I rarely agree with that problem - I love old brick walls, I find them so interesting, especially when you can see where things have changed: either where the original builders ran out of bricks and had to use other materials, which you see quite a lot in old walls, or the ghosts of old doorways or windows, which occurs surprisingly often) and we have tall plants in the narrow bed beyond it - currently Eupatorium, a five- or six-foot high monster with large purple heads - so we see the flowers, but don't have to look at the bare stems in summer, or the bare soil in winter. 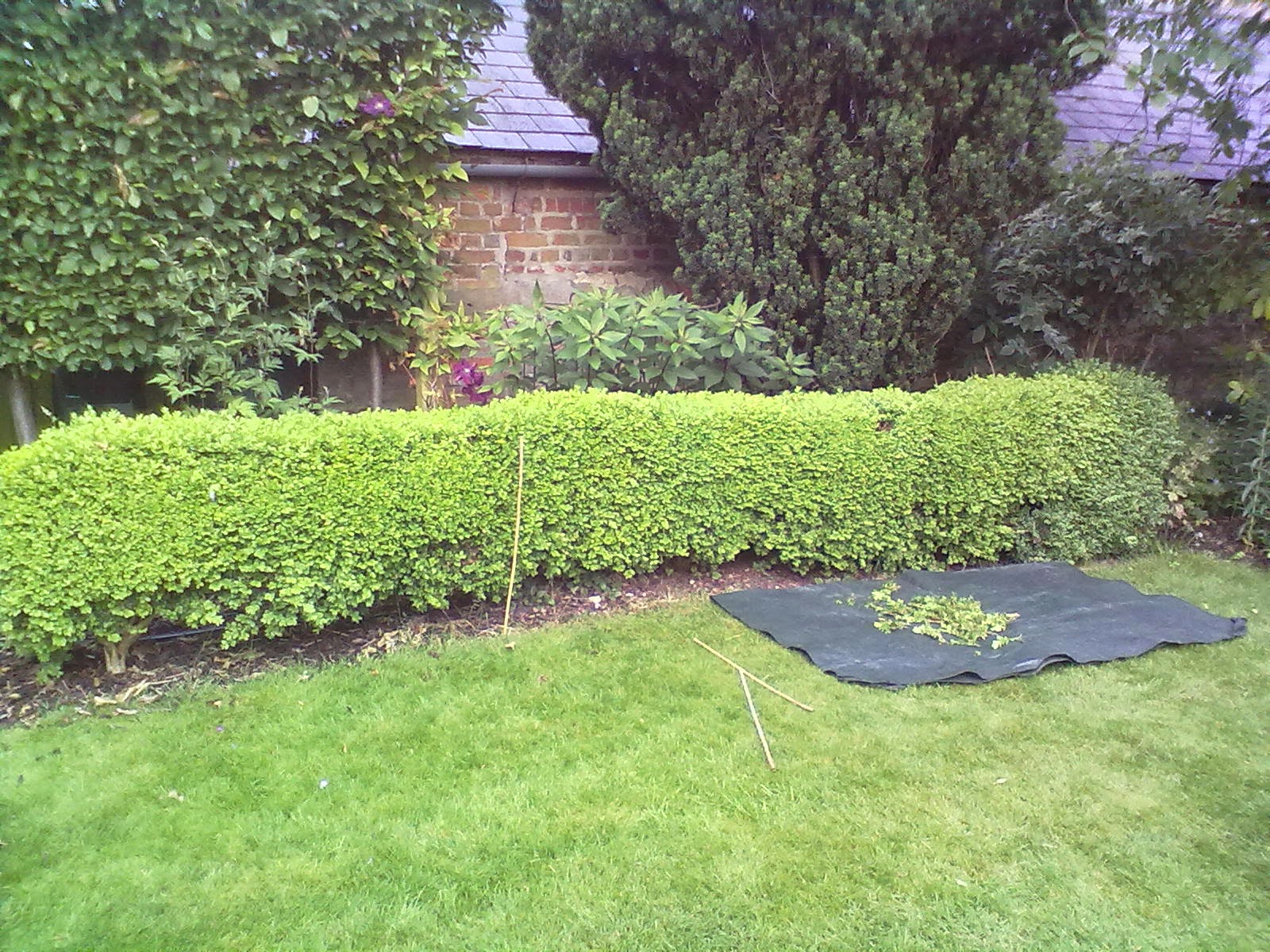 Last year, the decision was made, it was to be shaped into something more interesting in its own right.

Here it is in July, slightly overdue for a clipping, but we had deliberately allowed it to grow on a bit, in order to give us more leeway for the reshaping.

My Client decided that she wanted it to have three humps, two dips, and rounded ends. She placed canes to mark where the two dips would be, and our plan was to allow it to grow up higher than it is at present, for the two humps.  So it would be a slightly flat-topped hedge to start with, and she was happy with this.

The alternative would have been to have taken the existing height as the top point, and cut the dips well below that: but my Client felt it would make the whole thing too low.  It's always much easier to recut something lower than to wait for it to grow, so it was agreed that we would cut the dips today, and let the humps grow up over the next few months. 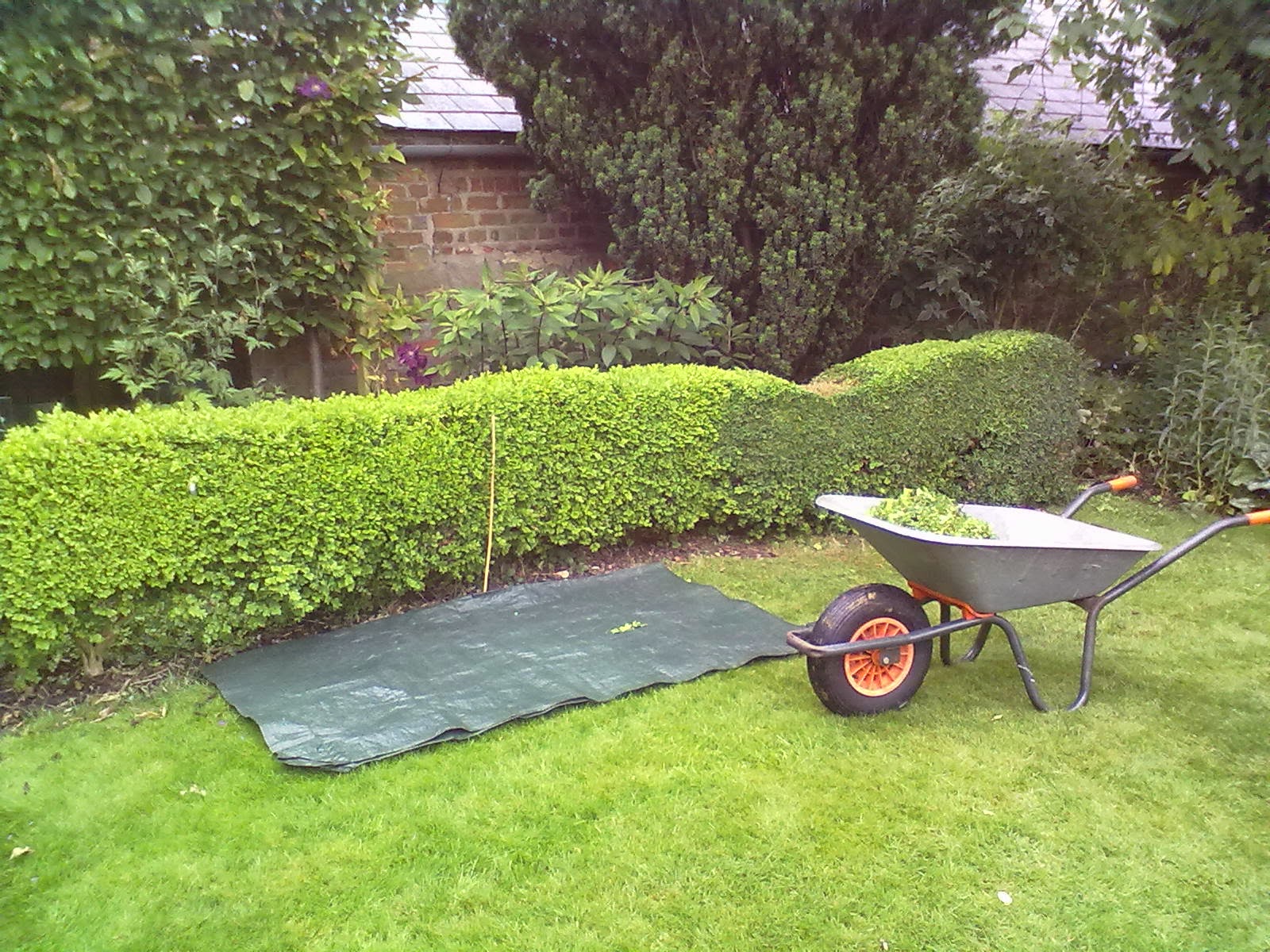 Here's the beginning: I rounded the end, cut the first dip, and clipped the front face of the hedge.

I did wonder if it would be more time-efficient to clip the entire front face first, but after a little consideration I decided to do it one section at a time - mostly because I thought that if I clipped the front first, making it all neat and tidy again, my Client might have a change of heart! 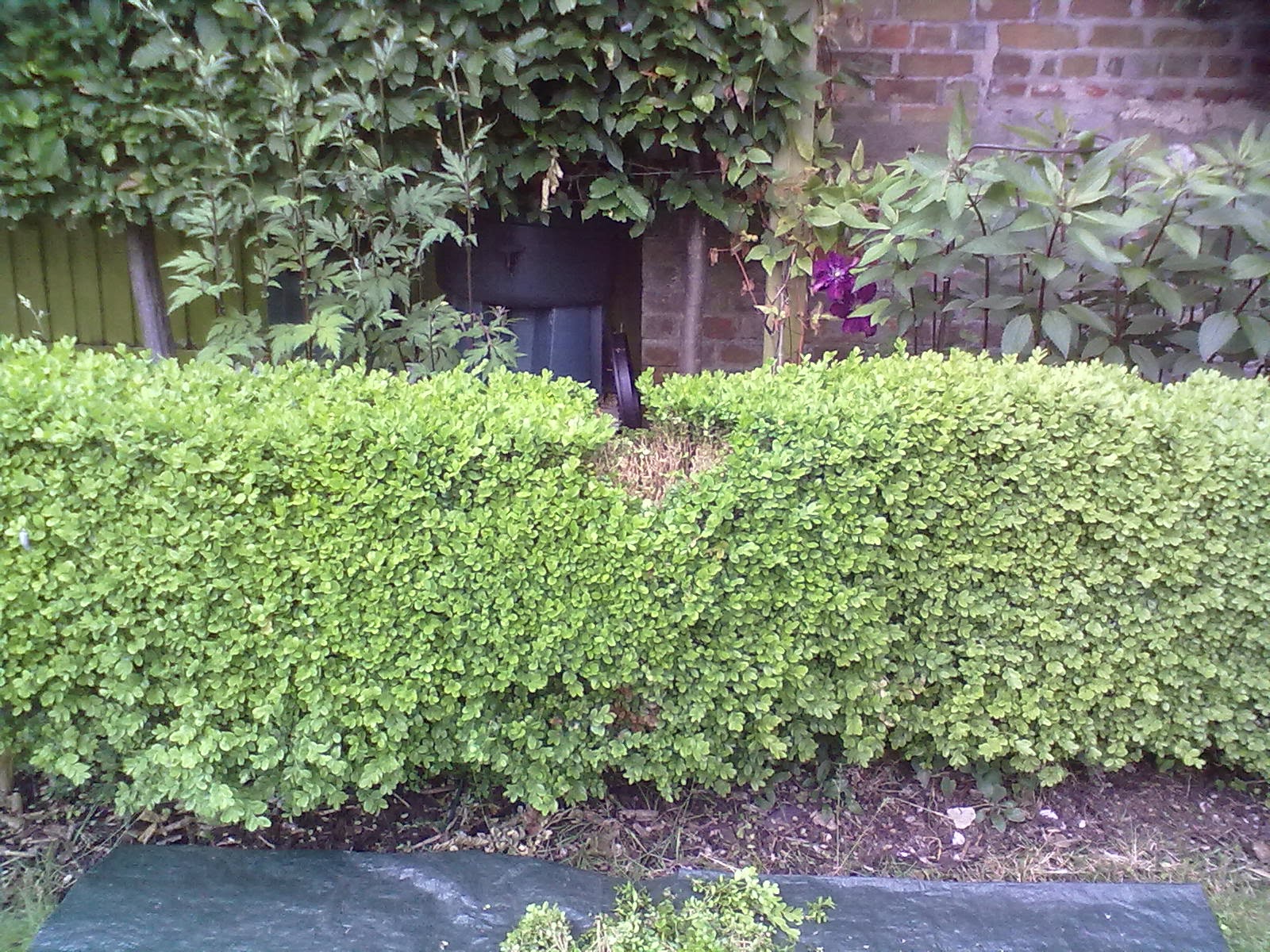 Here's how I made the dip: at the position marked by the cane, I used secateurs to chop right across the width at the height required.

If you have not done this before, don't be alarmed that you appear to be cutting into dead, brown wood.

This is what Box does; all the leaves are concentrated at the outside, and the inside can appear to be quite hollow. But once the branches are exposed to the light, new little leaves will appear and it quickly goes green again. 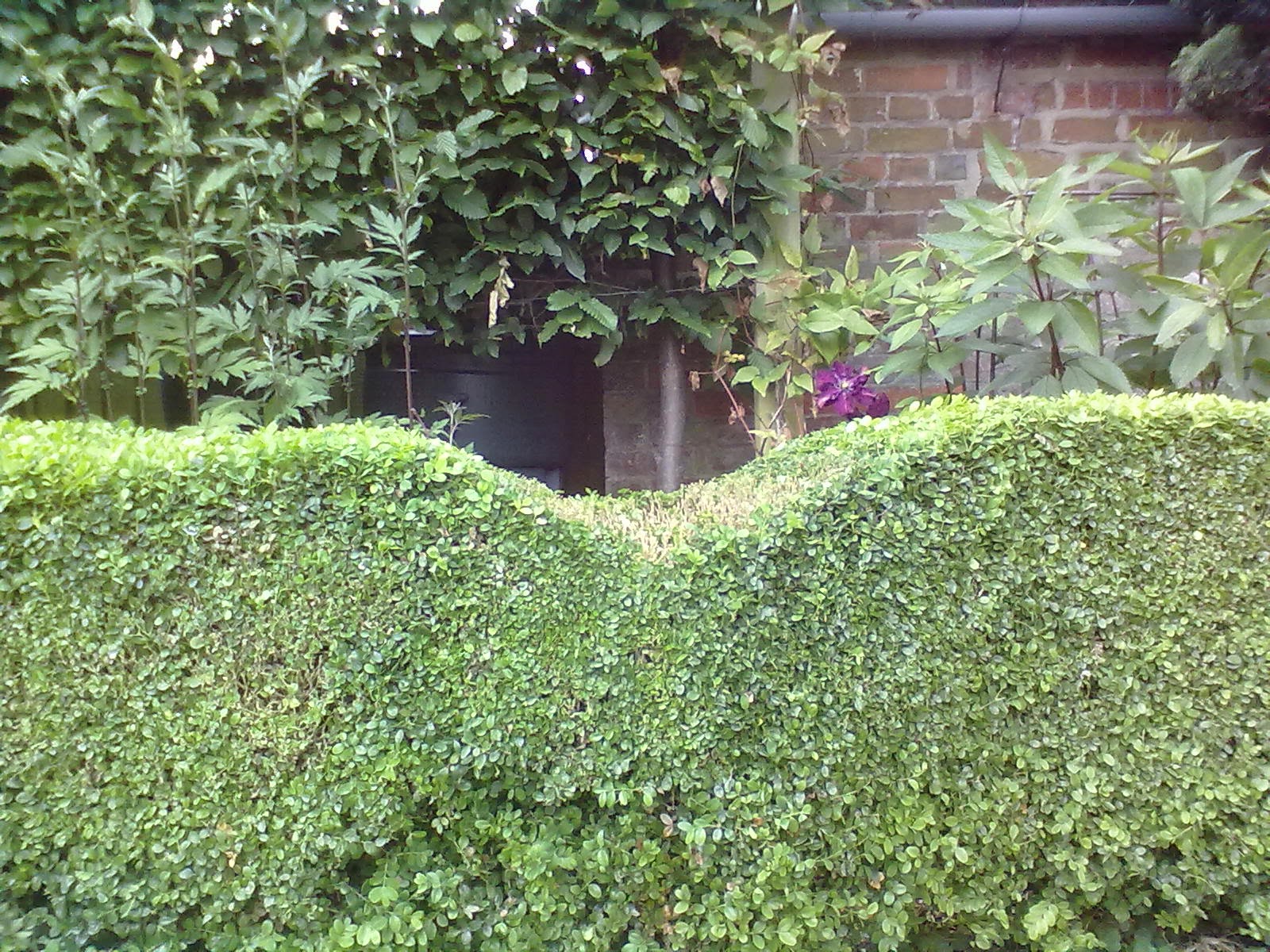 Working outwards from that initial cut, I levelled off the dip, mentally drawing a curving line upwards above the hedge, to allow for the humps, once they have grown.

Although we want the humps to grow, I still gave that area a light clip, to encourage more growth.

If I didn't,  the upward growth would be long thin shoots, and the top section of the hedge would for ever more be lanky and prone to flopping about.  In order to keep it strong and sturdy, it's important to keep clipping it lightly, even as it rises up. 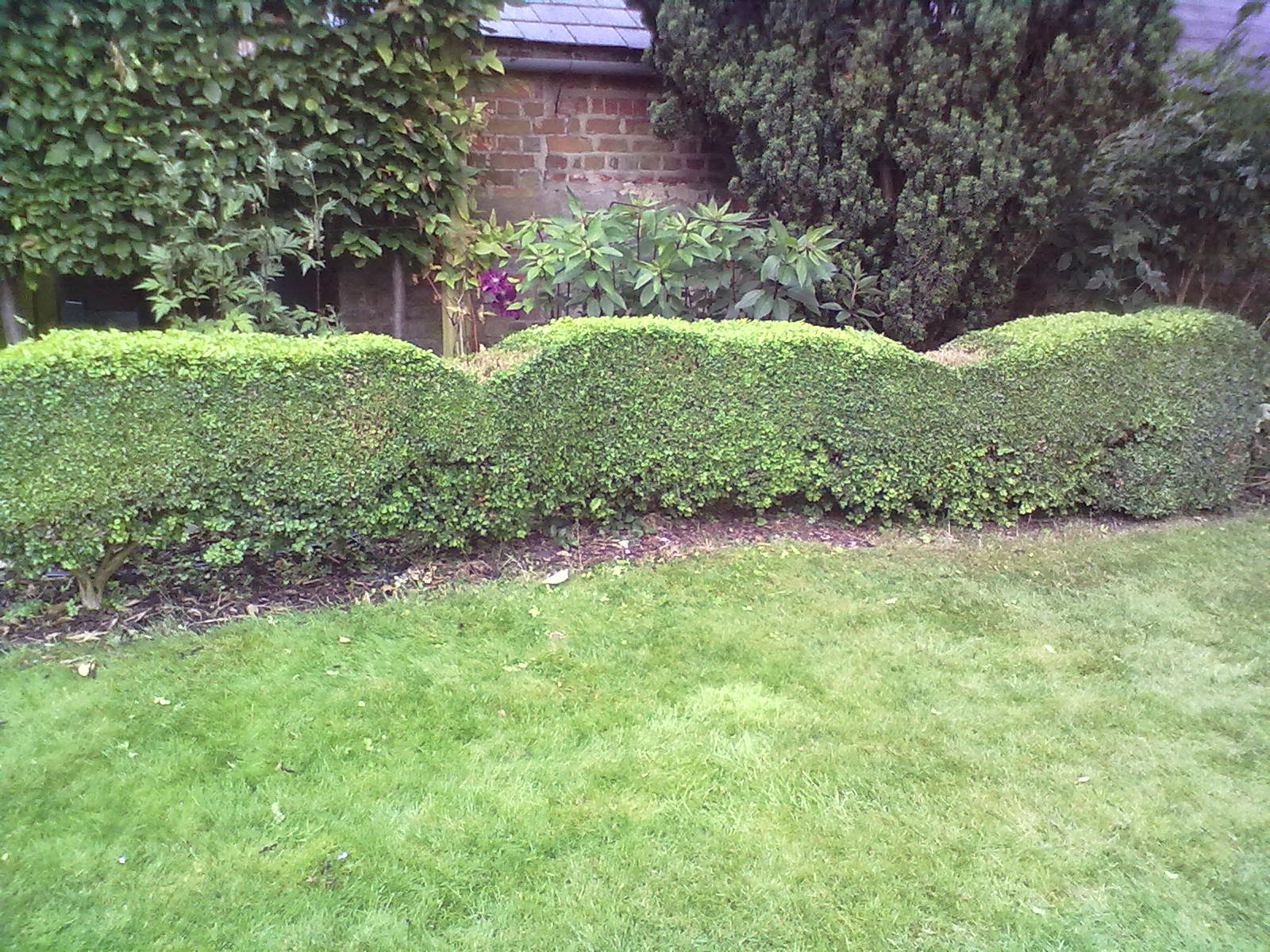 Here's the finished hedge on that day: you can see the brown patches in the dips, and  you can see that the humps are flat-topped and a bit strange-looking.

But the Client was happy, and over the following few months the brown parts greened up beautifully, and the tops grew nicely.

Typically, I did not remember to go back and take a photo at the end of the summer, to show how much improved it was -  oops!

After finishing the clipping and clearing up the mess, I gave the hedge a good feed of growmore scattered around the base of the plants, and gave it a good watering to get the feed down into the soil, and to encourage it to make a growth spurt and green up quickly.

Simple!
Posted by Rachel the Gardener at 09:05