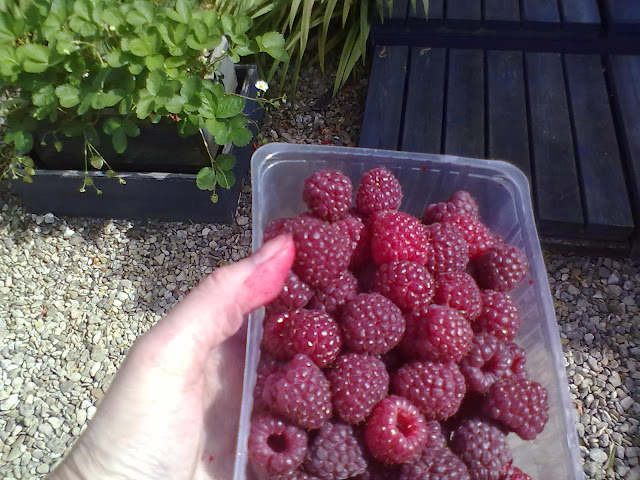 I always recommend rasps as being one of the easiest soft fruits to grow - as long as you like eating them of course.  I started with about six plants, which came from my allotment, and which were stragglers, growing out of line. They were simply pulled up, each with about six inches of root: I then plonked those in a rough curve in my back garden and left them to get on with it.  They were fruiting the next year, and have continued to thicken up and crop well ever since.

Bad points:
1) They do tend to send up suckers everywhere. You have to be on the alert for them, and as soon as you identify one, pull it up bodily.
2) You do need to wear gloves to do so, as they are very prickly on the stem, and on the leaves.
3) After a couple of years, you go through a phase of being sick to death of them, so you stop picking them altogether.

So, a word about the maintenance. Don't be suckered (ha! ha!) into buying early fruiting ones. They are a pain:  they require permanent frames, wires, training, a complicated two-year fruiting regime and generally faffing about. And for what? To get rasps maybe a month earlier, when there are plenty of other fruits around. No, I suggest you buy "ordinary" autumn fruiting ones, and I recommend Autumn Bliss as being the best.   These ones don't need staking, they don't need wires to keep them upright, they don't need training: every winter you chop every single stem down right to the ground and throw all the tops away. Could not be simpler.  In my garden, they don't even require netting, as the birds don't seem to be interested in them.

As mentioned, they do send up suckers: if these appear close to the originals then fine, they become part of the block: but they will send runners right the way across the garden if they have to.

They don't need frames or training - but my garden is very small, so I put up a wooden post at each end of the row, and one in the middle, and I wrap a length of green rope around them, to hope them more or less upright, and to give me room to squeeze past them on both sides. With a bigger garden, this simply would not be necessary.

They start cropping in late July ish, depending on the weather: and usually they keep on going right into November. Fantastic! If you don't pick them every day, or at least every other day, you get some that go over-ripe and then go mouldy, which is pretty revolting, but easily prevented by getting out there every day and picking.  When I've had enough to eat, I freeze some - just spread them out in a single layer on a metal baking tray, into the freezer, and when solid, shake them off the tray into bags or boxes and stack them neatly in the freezer. They last for months, and taste very nearly as good thawed, as they do fresh.

If I get so many that I get tired of them, I literally just throw them on the compost, but do keep picking them, to avoid the mould.

Best of all, they do cost a huge amount in the supermarket: yet cost nothing at all to grow! Of course, you may have to buy your original plants, but as they are so prone to suckering, you may well find that by asking around, you can get some for free, as I did. Well, they were from my own allotment, but you know what I mean.  Suckers may take a year or two to get fully established, but time flies, and in no time you will have your own crop, right on your doorstep.

I don't feed or fertilise mine, nor do I water them, they seem to do perfectly well on their own.

What more could you ask?!

Posted by Rachel the Gardener at 14:38