I had a lovely morning  last week: I arrived at a client's garden for the first time this month (due to the weather, not any laziness on my part) and as I walked across to the bridge, the Egret flew up, up and away.

Egrets, in case you haven't met one, are like Herons, but white. And a lot smaller.

This little fellow has very nearly taken up residence on the lake - yes, my client has a lake - as he's been seen there over the last couple of years: not every day, but at least once a week or so. We haven't yet found him nesting or taking up a permanent roosting position, but we live in hope.

Sadly, I don't have a picture for you - I hadn't even turned on my phone at that point, as there is no reception when I am working in this garden, so I generally don't bother to turn it on until I go home for lunch.

My client has established that it's a Little Egret, and apparently they are "one of the UK's most recent colonisers" having only started coming here in 1989.

So that was a nice start to the morning.

An hour later, the client came out for a consult on a newly-cleared area of the garden: they had two  Sycamore trees removed: one merely "large", but one "enormous", letting in a staggering amount of light, and revealing an area which is somewhat larger than my entire garden, and which we are now going to be able to plant up and incorporate in the main garden. 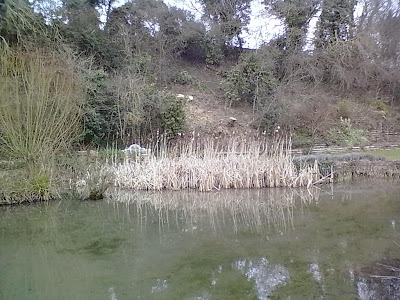 Here's a view of this new area, seen from across the lake (just to prove that I'm not fibbing about them having a lake all of their own!).

Just above the patch of dying-off Reed Mace there is one stump-top to be seen, and halfway up the bank is the top, double, stump.

All that area of light brown is the earth that hasn't seen the light of day for many years, being completely covered and shaded by the Sycamores.

So there we were, standing at the bottom of the slope, making plans and discussing options, and speculating as to how long it would take the stumps to start re-growing (about a month by my reckoning) and what we are going to do to stop them, which involves the purchase of a bulk box of glyphosate and a dedicated small hand-squirter, so that I can spray it every week as new leaves appear.

As I glanced to my left - to the section of bank just in front of the bench, whose curved top is just visible above the dead vegetation there - I saw a large furry thing on the bank, intently scoffing away at the foliage. Yes, a real live water vole! We knew they were there, as the lake banks were surveyed by BBOWT just last year and they confirmed several sightings of "scat" areas: they make little platforms to poo on, and apparently we had several of them.  But this is the first time I'd actually seen one there for myself.

As always, I am surprised at just how big they are - easily as big as a rat, or a fairly chunky guinea-pig.

He just sat there, nibbling busily away, completely oblivious to us talking and laughing quite loudly, just six feet away from him.

And again, alas no photo as my phone wasn't turned on....

Two minutes later, as we turned back to the house, the first of the two Kingfishers shot across the lake in front of us, taking up his usual perch on the little Island - yes, the lake has an island on it - shortly followed by the other one, which is presumably his mate.

So there you go, Water Voles, Little Egrets and Kingfishers, all in the space on an hour. I love living in England and working outdoors!
Posted by Rachel the Gardener at 07:00