Fish, Newts and the Yard

Whew, I believe this what is called a "busy period".  I've had a shed-load of work to do, I have a botany exam coming up in less than three weeks, I've just completed my final Plant Stall of the year, and I've finally managed to do a stock-check of the Yard.

All is going well: I now have 485 plants up there, and it's starting to look like a proper nursery (albeit one run on a shoestring). I was having problem with the wind blowing the plants over, so I spent some time putting "backs" onto as many of the benches as possible. 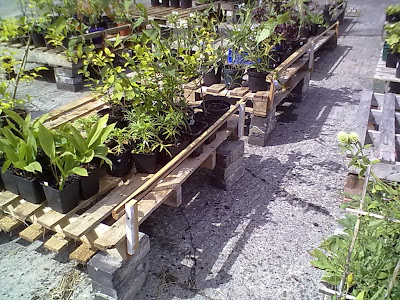 Here they are, showing the cunning construction technique of "nailing bits onto a pallet".

Not exactly skilled carpentry, and my father would be turning in his grave if he could see it, but hey, it was cheap! It was quick! It works!

The amount of falling plants has been substantially reduced.

The yard is a bit of a wind-tunnel, I am discovering, but there's not a lot I can do about that.

Meanwhile, the Tank continues to work well: I fixed up a strainer to the downpipe, to avoid ever having to bail the thing out again, and it works really well. Every so often, particularly after a downpour, I just tip out the contents. 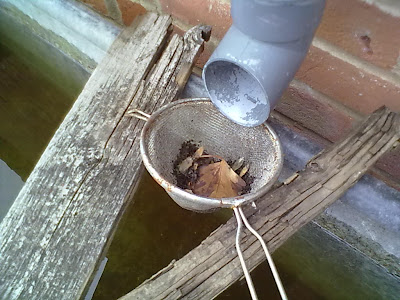 Here's a typical strainer-full after a lot of rain.

As you can see, all sorts of stuff gets washed down.

And what of the fish?

Well, since the "soup" incident I've left a board across the top of the tank, shading about a third of it, which might have helped to reduce the general green-ness of the water. 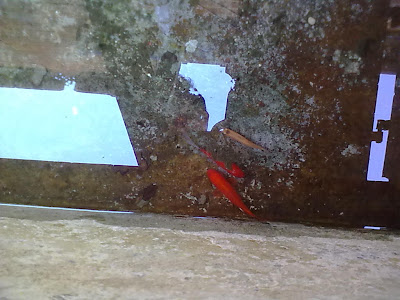 To prove that they really exist, here they are just after I put them back in the cleaned-out tank: can you see them?

Scott is the big one at the bottom, then there's Bill facing the other way, then above them - I'm looking down from above, obviously - is Bram Tanking, the pale orange one.

They seem to be perfectly happy in murky water, and on sunny days they float around in the sunlit sections, racing for cover at the slightest movement.

As they have completely cleared the mosquito larvae away, I have now taken to feeding them a pinch of fish flakes every day or so, and they seem to appreciate them. It's hard to tell, with fish.

So, incredibly long story made short: keeping a goldfish or two in your water tank will indeed keep the mosquitoes away.

While on the subject of Natural History:  at home, I moved a tray of plants onto the bench for potting on, and look what I found underneath the tray: 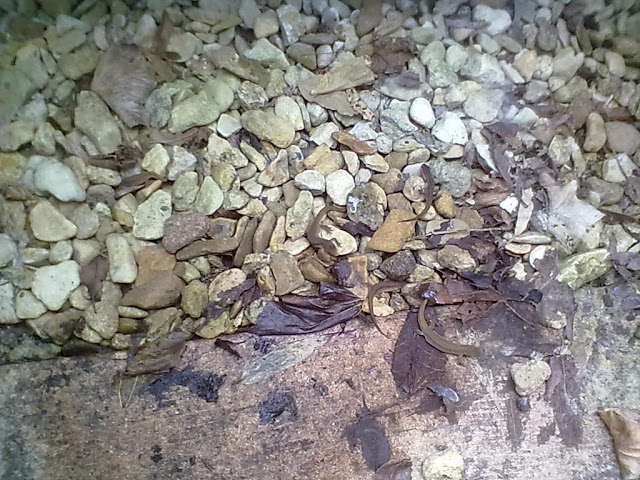 Can you see them? Yes, newts, common newts in fact, five of them. They just love my front yard, and I have no idea why. It's entirely shingled, there's no pond, no soil, just an awful lot of things in pots.

I can only assume that they like sheltering under the pots, so the birds can't get them: and when I water, presumably enough water gets over-spilled - not that I am wasteful with my watering, please be assured - to maintain a sufficiently damp environment for them.  I have no idea what they find to eat. 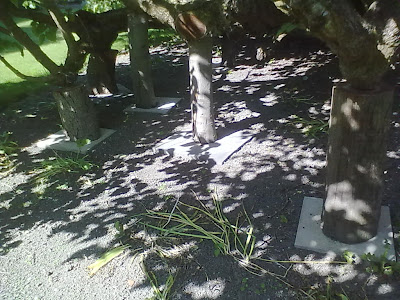 Now, a minor horticultural diversion, isn't this a lovely sight?

Its a very old Mulberry tree, which suffered a great deal over the winter, and the client concerned has just finished the task of winching the branches and propping them up.

He used sections of tree trunk from an earlier felling of a pear tree that was no longer producing, and the effect is strangely attractive.

Possibly the use of real tree trunks, rather than block of concrete, is what makes the difference. 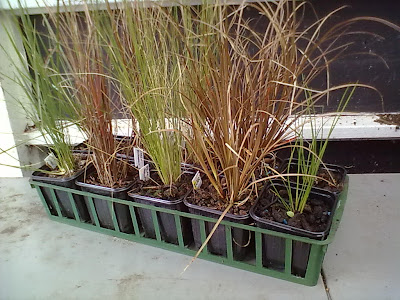 Ever wanted your own Prairie bed?

Intrigued by my constant references to Prairie Planting?

Well, fear not, the effect can now be yours, I have a number of types of grass available for sale, all grown by me from seed.

The mixed pack shown here features a selection of the following grasses, from left to right:

I've sold quite a few of these, and I offer the option to mix and match amongst these grasses, and to include some other plants which I think go well in a Prairie setting, such as Echinacea purpurea - Cone Flower - and Sanguisorba officinalis "Arnhem" which is a sturdy version of this popular plant, with wine-red flowers and which can easily grow 4-5' high. But as the leaves are so delicate, it maintains an appearance of being airy and spacious.

And of course the old favourite, Verbena bonariensis - no prairie planting is complete without this one! I also have, to make a change, Persicaria bistorta 'Superba' as ground cover to go around the clumps of grasses.

In addition, I also have several larger grasses to really "make the statement" including some lovely Miscanthus types.

Whoops, turning into an advert, sorry!

Well, the last Plant Stall of the year went well, I was in the garden of Penny Spink's fantastic garden again, for the fourth year running, so a big thank you to Penny for her hospitality, and "hello" to everyone I met on the day. 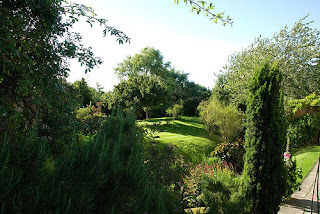 Her garden is well worth a visit, by the way, and it's open under the NGS Yellow Book scheme.

No photos do it justice, so here's just one to get you interested!

It's called Woolstone Mill House, the village is Woolstone and it's just under the White Horse at Uffington. For some reason it's always described as "near Faringdon" but to me, living in Wantage, it's "near Wantage". The garden is open on Wednesday afternoons from April to September, and it's lovely!
Posted by Rachel the Gardener at 17:18