How to remove a gigantic Buddleia that is in the wrong place.

How many times have I been asked to deal with this problem?

Buddleia are little devils for seeding everywhere ( a single plant can produce a million seeds, apparently), and the seedlings are so neat and innocuous that they are often overlooked by the garden owner. They also employ the cunning strategy of flowering really early in their lives, and the flowers are so lovely, and attract so many butterflies, that the garden owner is usually delighted to see them, and allows the plant to grow on.

And here lies the problem: when we plant something in our gardens, we choose where to put it, somewhere suitable for the eventual size of the plant, somewhere where it won't outgrow its welcome, but the self-set buddleia often plonks itself in entirely the wrong place for a large, fast-growing shrub which requires heavy-handed cutting every year.

Last week I was asked to dig out a Buddliea which had become massive, to the point where the Client couldn't see out of their window.

First job: get the loppers and take off as much of the top growth as you can, and get rid of it.

Second job: get the bowsaw, and saw the trunks down to about knee height. Make sure to take off as many side branches as you can - the idea is to be able to work all around it without being poked in the eye every five minutes. 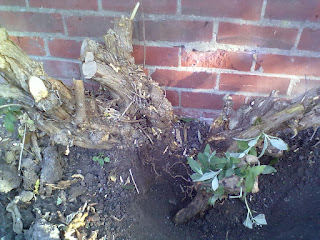 Here is my stump, after initial clearing: there is one main trunk, on the left, and two smaller ones on the right, which were probably separate seedlings.

When you get to this stage, get out the knee pads or the kneeler, and a small trowel and small hand-fork or Daisy Grubber, and start excavating. Dig out a shallow bowl all around the roots, heaping the soil back out of the way - there's nothing more maddening than soil continually falling back into the hole you are trying to dig! 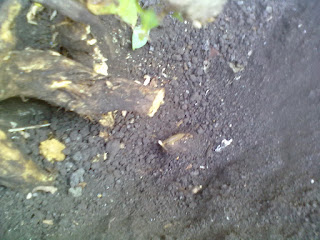 Once you have exposed the roots, you can see what you are dealing with.

In this case, the right-hand two stumps were easily severed with loppers, having gone down three bricks-worth in depth. They won't grow back from this depth. 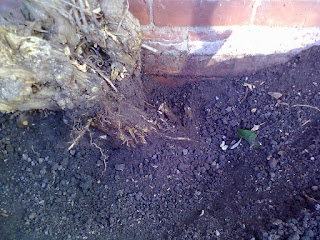 With those two out of the way, I can now see the main stump more clearly.

As you can see, it's far too big to chop off, so I have to excavate a bit more.

However, I don't actually have to dig much deeper, I just have to clear all the soil away from the roots. Use a hand fork, or my favourite tool, the Daisy Grubber, to "pick" away all the soil. 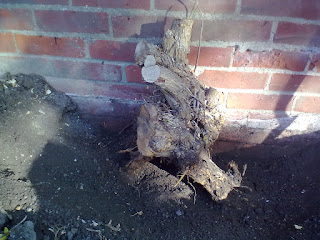 You might be surprised to see how much soil comes away, and how what appeared to be a solid, massive root ball is actually only a central lump, supported on three or four thickish roots. 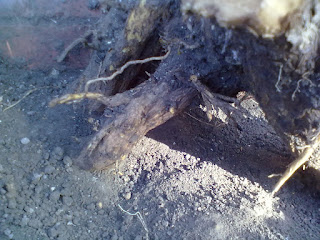 Here's a closer view of the very base of this stump, and now you can see that there is a "cave" underneath it: it's not solid at all. 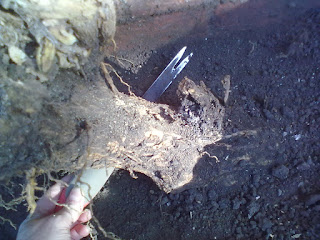 To prove it, here is my Daisy Grubber, poking in past the big right-hand root and out the other side. 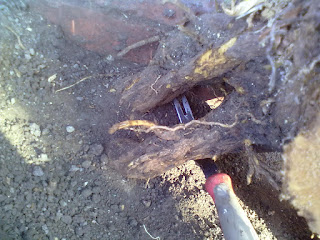 ..and here it is, doing the same thing to the left, where there are just two roots holding the stump in place. 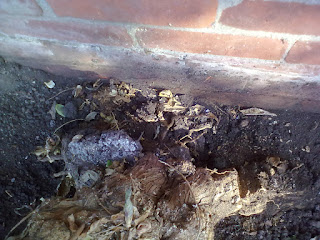 The loppers made quick work of those three roots: cut as low down in the soil as you can, and they should not resprout.

I don't know if you can see it clearly, but I have dug down three bricks-worth below the original soil level, so there is little chance that these roots will grow again. 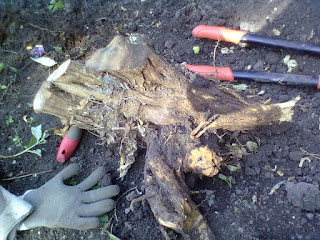 Here is the stump in it's full glory, along with one of my gloves to give some sense of scale.

As I said, it's a massive stump, but it's not actually a massive root - just three main thickish roots, all of which were simply lopped off once I had removed enough earth to be able to see them clearly. 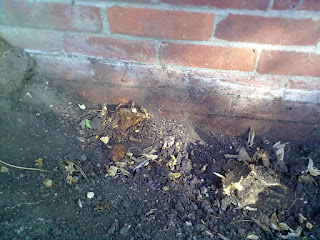 All that is left is a collection of root stumps. 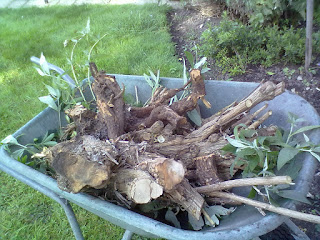 Here is a barrow load of stump, and roots. Phew! Job done! 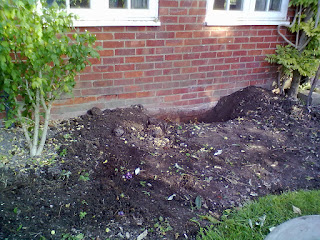 Hmmm, well not quite "job done" as I now have to fill in the hole, and refresh the soil by bringing in a barrow-load of our home-made compost, then digging over the whole area to de-compact it.

Then, next week, I can plant the new roses!

Posted by Rachel the Gardener at 10:25