How to: remove Ground Elder.

Some very nice friends of mine recently asked me if I'd come up and help them with a bit of gardening - "We have a border that needs sorting out," they said, "It's got a bit of ground elder in it." 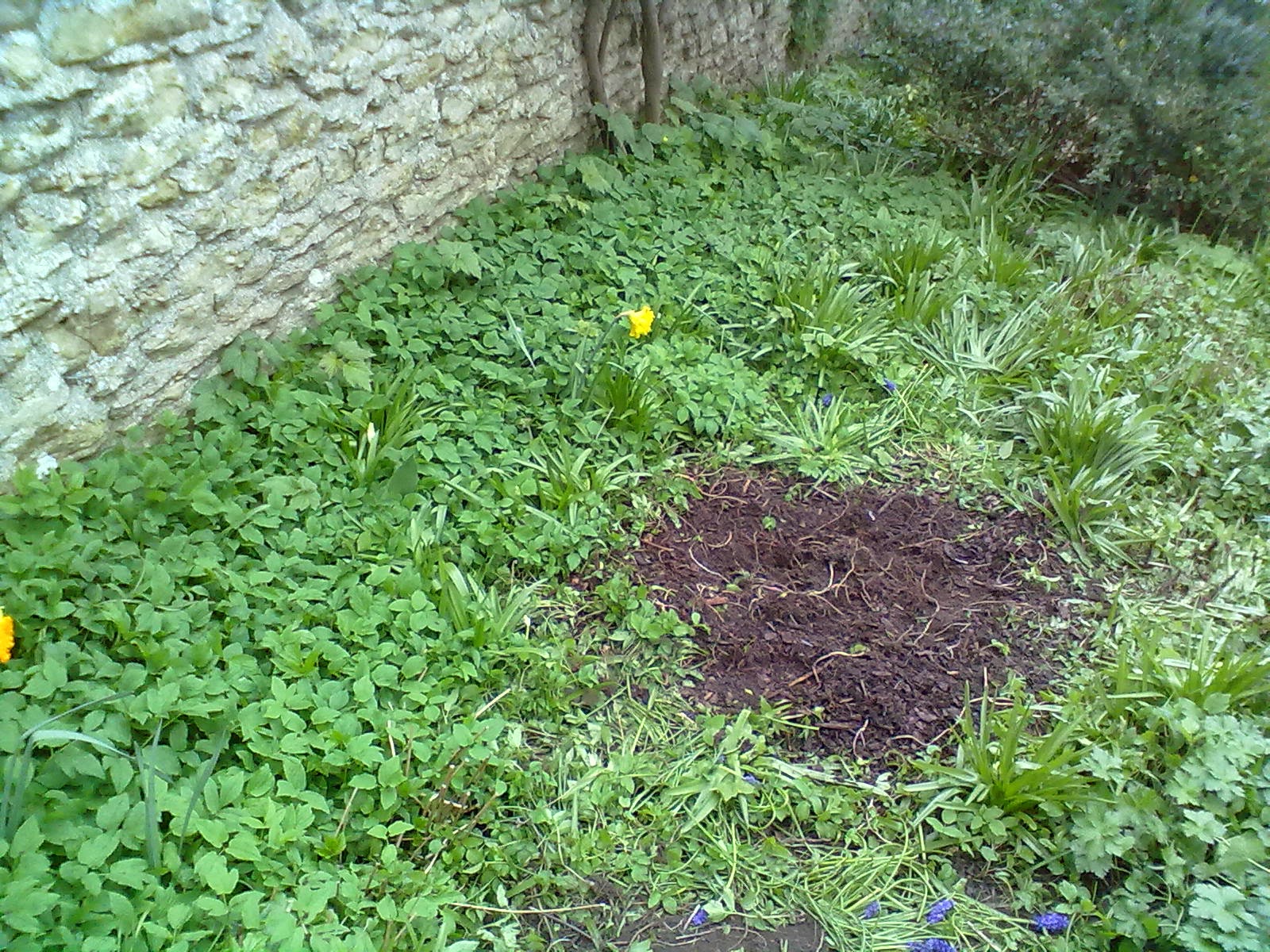 It was a complete SEA of ground elder! And this is only about a fifth of it!

The hole, by the way, is where we removed a shrub that (after careful cleaning of the roots) was to be relocated elsewhere... yes, once again I forgot to take the "before" photo before I actually started, oops....

So what do we do in this situation?

Answer: exactly the same as we do for Couch Grass: we dig once, dig twice, dig thrice.

There is no shortcut. You dig it over, as described for Couch Grass (and yes, this applies equally to Bindweed), loosening the soil and gently easing out the stuff by the yard. Put it straight into bags to be burnt, sent off to the tip, or put in the brown bins: don't even think about composting any of it. 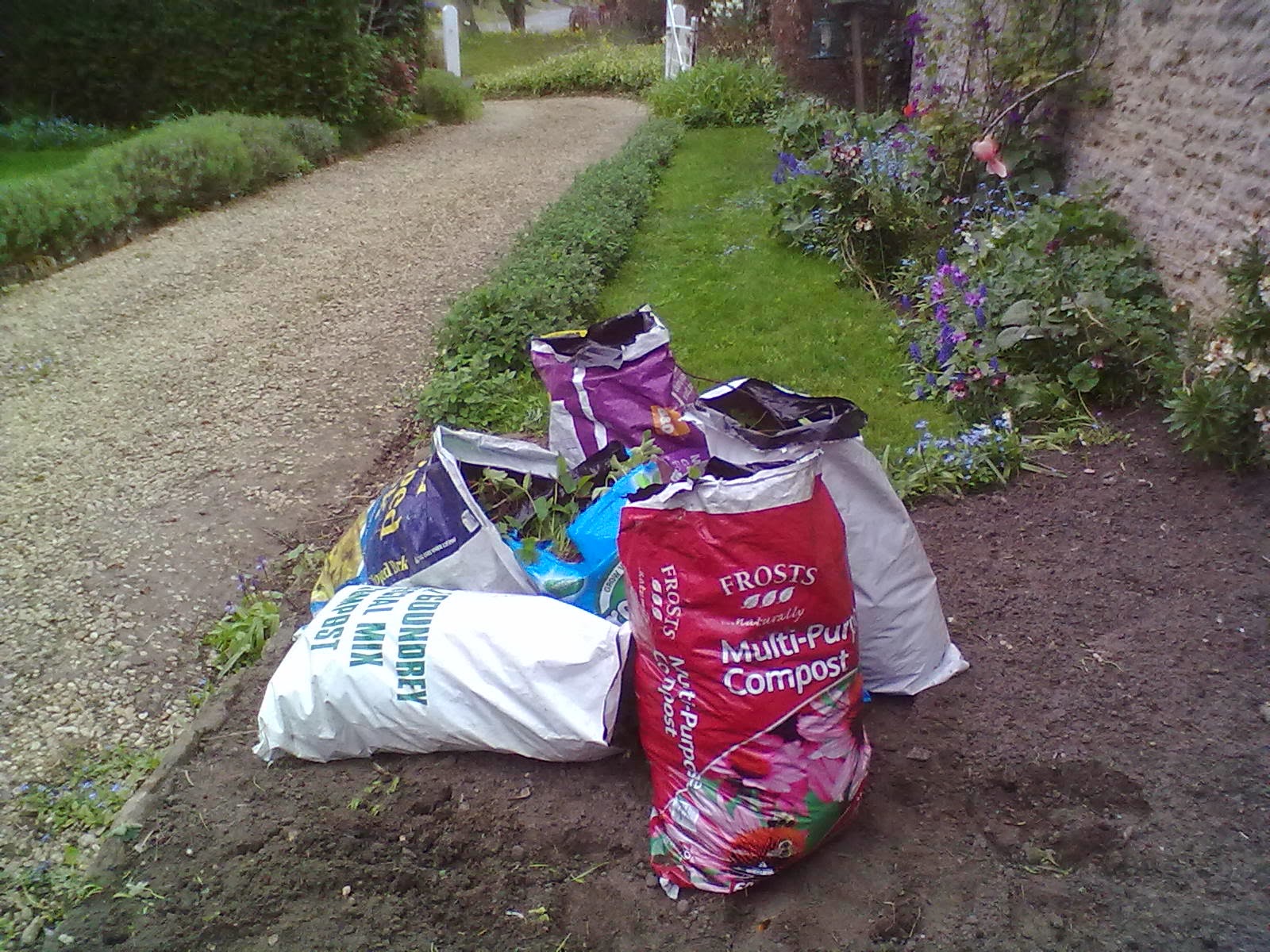 Here are six bags of roots, dug out on the first session: this was from about a third of the area, which gives you an idea of the sheer volume of material to be removed.

The idea was to make this end of the bed a continuation of the layout you can see behind the bags, with grass in the middle, a mixed border at the back, and a narrow border of nepeta at the front.

But first I had to clear it of everything, including odd bulbs, masses of Asters, and a couple of different types of geranium, all buried in amongst the ground elder.

I put aside several clumps of each, with instructions to the clients that, if they wanted to keep any of the existing plants, they would have to clean off every scrap of soil, and ease out every scrap of ground elder root before replanting. I always recommend dunking the clumps in a bucket of water to wash the soil off the roots, so you can get out every last little bit, so off they went to fill some buckets with water. 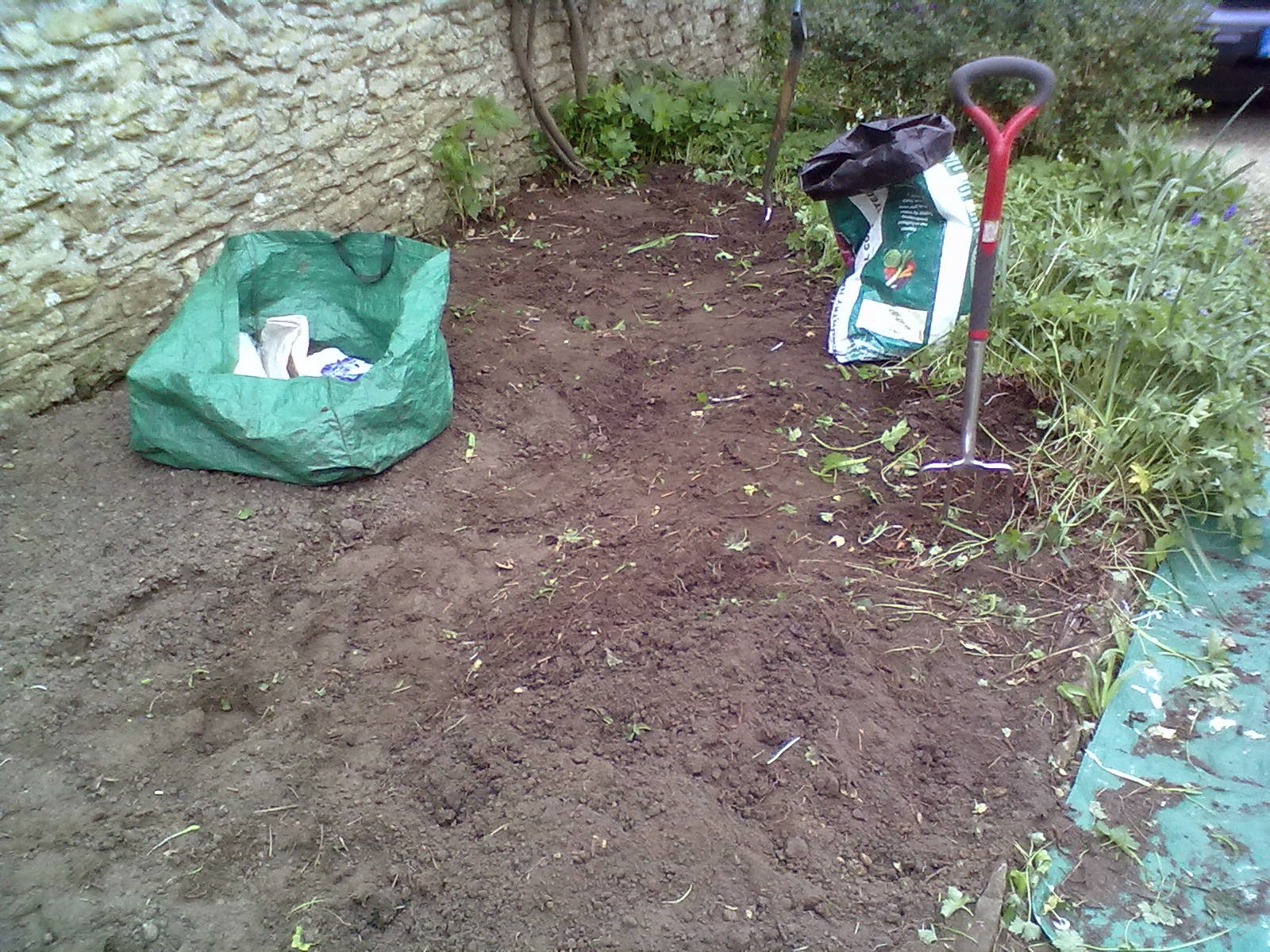 Here we are on the second session, the end is in sight...  it took about another eight bags to finish off the job, and yes, it was tough going.

But so worth it!

We managed to save a lot of white Japanese Anemone, along with a rather unexpected rose bush.  I'm hoping this will be accommodated somewhere in the back garden, as we are planning to get two more climbing roses for the wall, to match those further along - Zephirine Drouhin, a lovely thornless rose.

Well, I say "lovely".... all roses are lovely, I think, but thornless roses are a particular boon to the hardworking Plantsmith, as you don't get scratched to death every time you prune them. 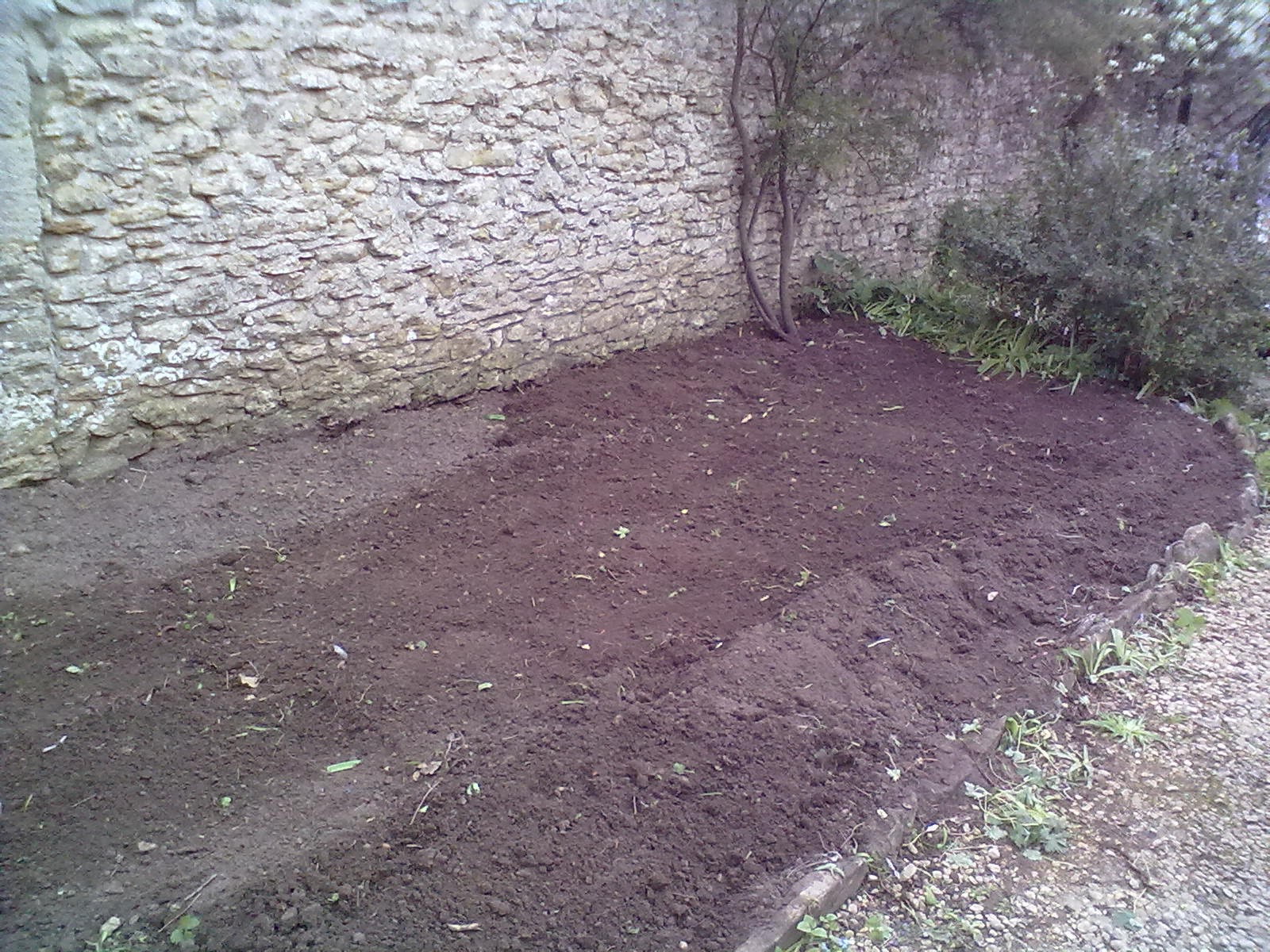 Here's the right-hand end, dug thrice, and with the central section having had an initial "firming down" as early preparation for the turf.

This is the part that involves walking like a duck up and down, all the weight on your heels, taking tiny steps, with passers-by looking at you curiously. Ignore them, it's essential to get the dug-over soil compacted, otherwise your new turf will rise and fall like green waves, and will look terrible.

There is a big difference, by the way, between soil that has been firmed down by duck-walking which is a good thing - and soil that is "compacted", which is a bad thing!

I now went away, callously leaving my friends with an empty bed (*laughs maniacally*) for a week, and instructions to keep an eye out for any regrowth of Ground Elder, and to spray any that they saw with glyphosate-based weedkiller.

The plan was to let it sit for a week like this, partly to check for regrowth, partly to let the soil settle, partly to give us time to do the initial planting of the borders without the complication of being unable to walk on the newly laid turf.

The plan worked well - there was a remarkably tiny amount of regrowth.  Most of it was at the back: it was very difficult to get all the Ground Elder out where it was growing in and through the old wall. However, persistence paid off, and my friends bravely continued zapping any bits they saw.

A week later the new plants arrived, and were duly put in place, which revealed just a few small bits of regrowth, easily removed and disposed of. As the soil had had a dense layer of weeds growing on it, I added some fish, blood and bone to the planting holes, to give the new plants a bit of a head-start, and reminded my friends to water them well.

Two weeks later (rain...) I returned: the rolls of turf had been collected from the garden centre that morning, so all I had to do was rake the centre section twice - firstly to get it level, secondly to get a nice tilth at the interface.

The first raking was using a "hard" rake, as opposed to a spring rake, holding it nearly parallel to the ground, and pushing and pulling very firmly. This takes the top off any high spots, and moves excess soil to any low spots. When I was happy that irregularities had been ironed out, I duck-walked over it one more time, to firm the soil. Then I did the second raking, to fluff up the top surface - which will be in contact with the underside of the turf. This also removes any stones and hard lumps, conveniently.

Now for the quick bit! Down goes the turf - green side up, stagger the joints, butt them very closely together, thump them down with your hand as you go, especially the joints, then don't let anyone walk on them.  Like carpet tiles, if you don't have a hard edge to the area, walking on them straight after laying will cause the strips to move apart. And if air gets into the joints, the turf will die, spoiling the effect and creating a lot of after-care.  Hence my instructions to my friends to stand on the drive and water the grass and the borders, without walking on them.

Here's how it looked, freshly laid: 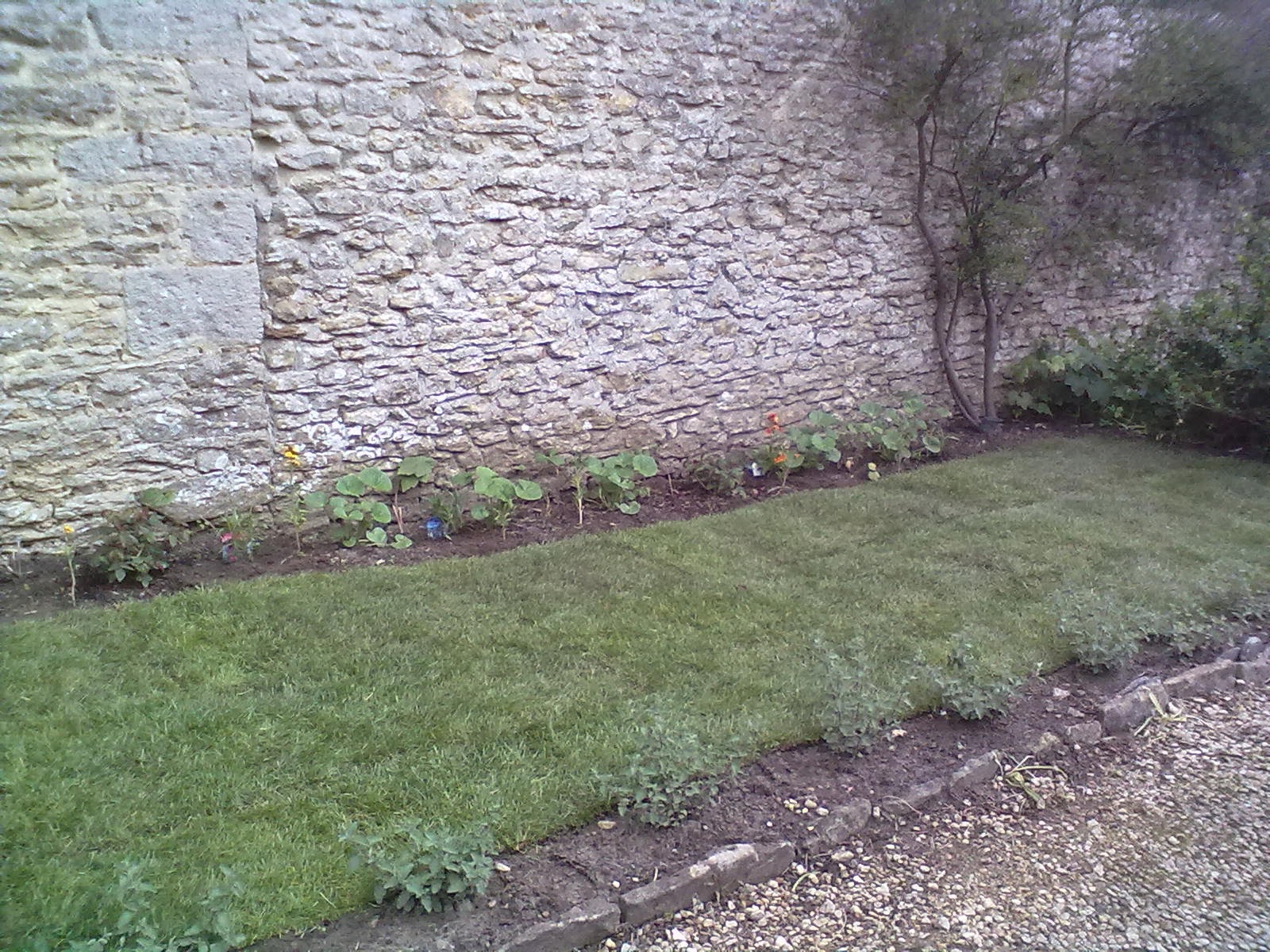 ...and here is the view from the other angle, showing the new section blending invisibly into the old section: 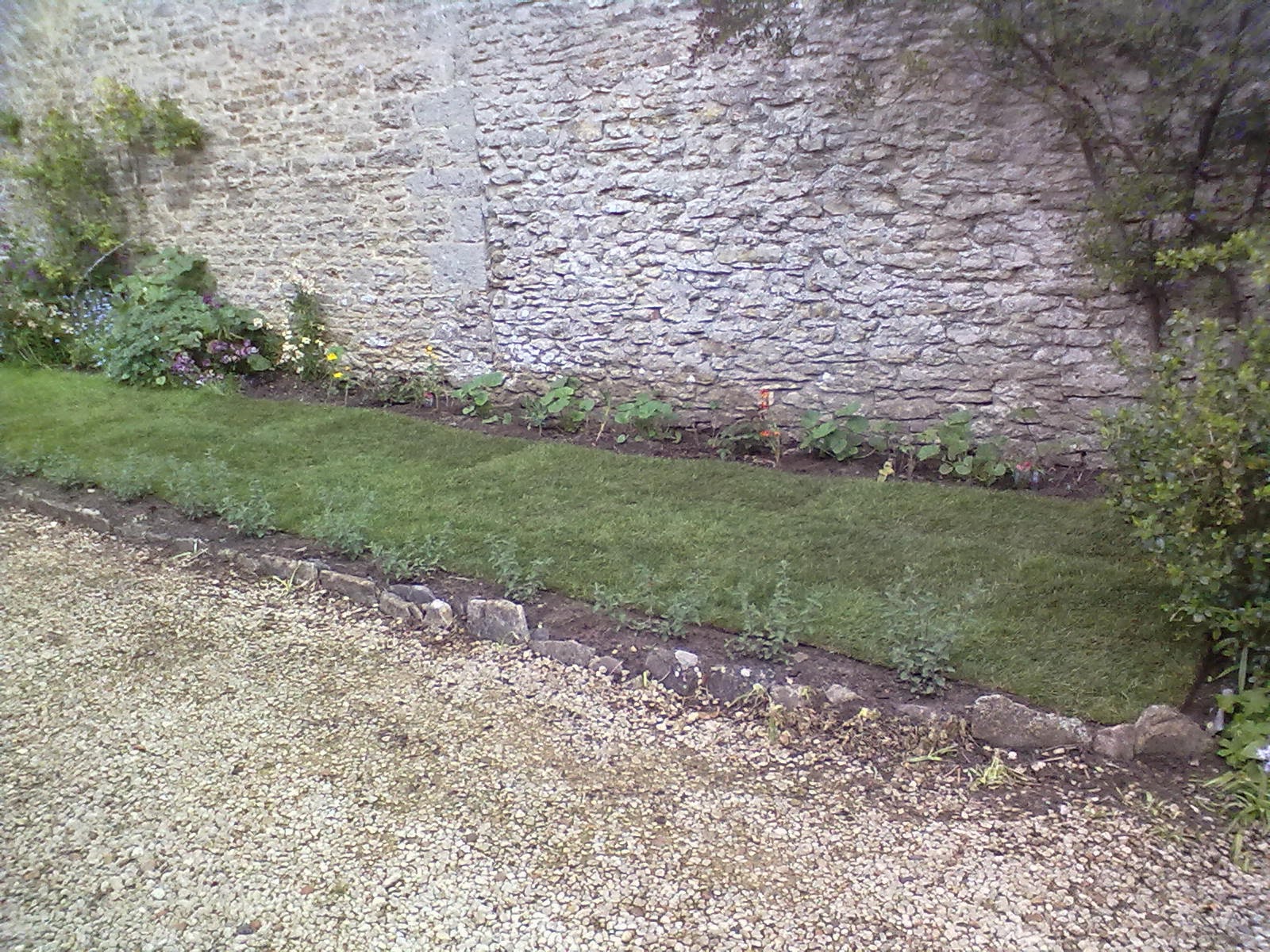 That was the end of the main planting phase, and my friends were left with instructions to water the plants every day using a hosepipe while standing on the drive, and to water the grass as well while they were at it.

All that was back in May: here is what it looked like in July, just two months later: 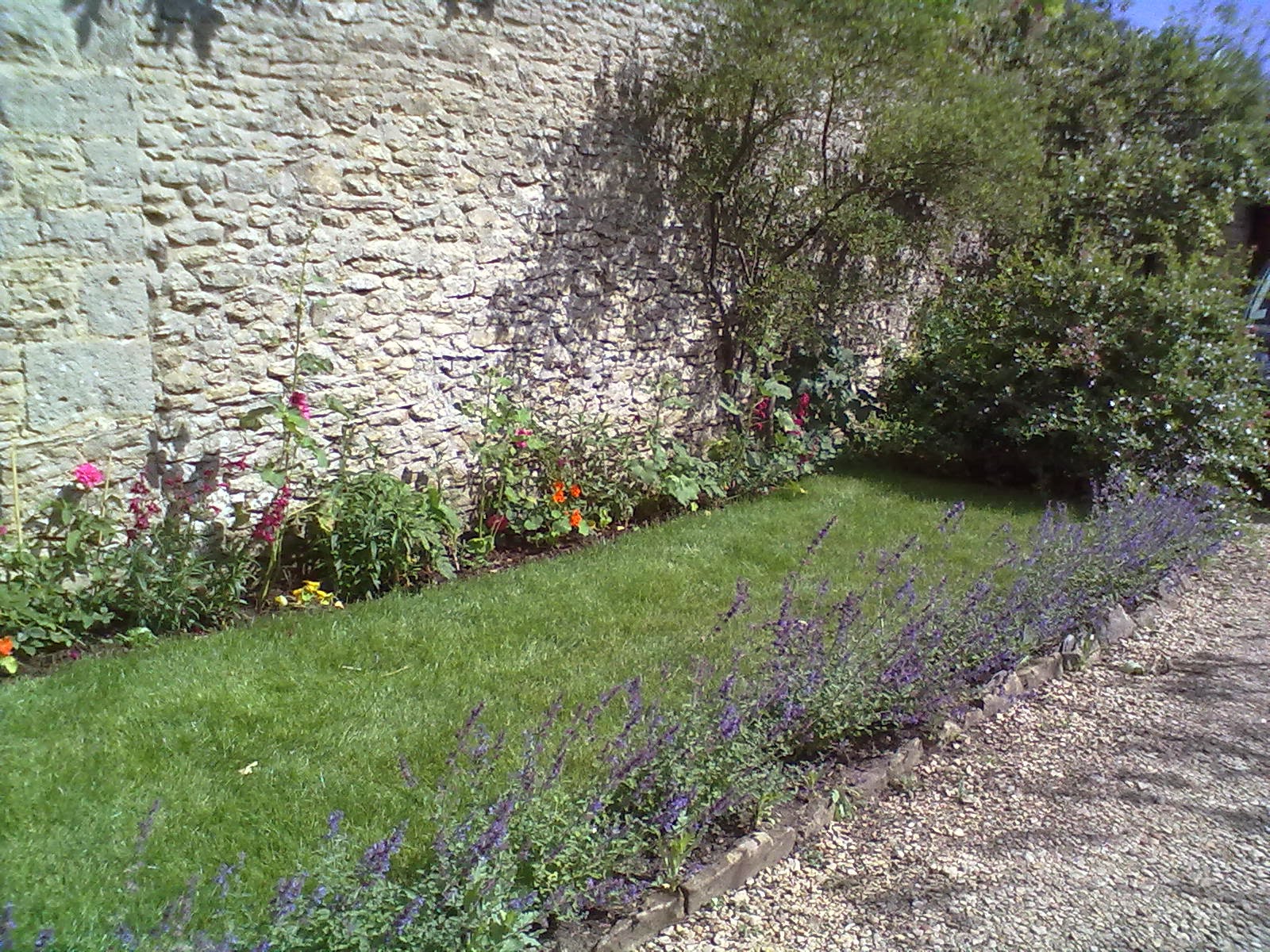 The new grass has knitted in well, it's now ready to be lightly mown , and the new plants are all settling in really well.

The roses are coming along well, although you can't see them as they are somewhat out-grown by the wall flowers, penstemons and hollyhocks.

As you can see, the tiny nepeta plants are really growing well, and I will be keeping them trimmed back very tightly, to prevent them getting floppy and woody.

Two months later I gave the nepeta their close trim to keep them neat, and did a thorough check for regrowth of ground elder. I would be lying if I said there was none at all, but what did appear was just tiny scraps, and easily dealt with: any found in the beds was eased out with a daisy grubber to avoid disturbing the new plants, and any found coming out of the wall was spritzed carefully with glyphosate.

As I had said to my friends right back at the beginning, there was always going to be some regrowth as the old wall was riddled with holes and quite possibly didn't have proper foundations, so the roots of the ground elder would be right the way under and through the wall.

But that's ok, as long as we keep an eye out for it and spritz all tiny new growth.

I went back last week and gave it a year-end once-over: cutting back the perennials for the winter, trimming any straggly bits of nepeta, planting bulbs for spring, and tying in the roses so they don't get battered over the winter.

Posted by Rachel the Gardener at 10:08