This meant a trip to Milton Keynes, which is where the rubbish goes to be sorted.

Yes, I know it's ridiculous to send truck after truck from Oxford to Milton Keynes, but it costs a huge amount of money to build these enormous recycling centres, and it really is cheaper to pay the fuel for the lorries to truck it around the country, than to build more of the centres.

The intake is very much what you expect to see - a huge mountain of mostly plastic rubbish: 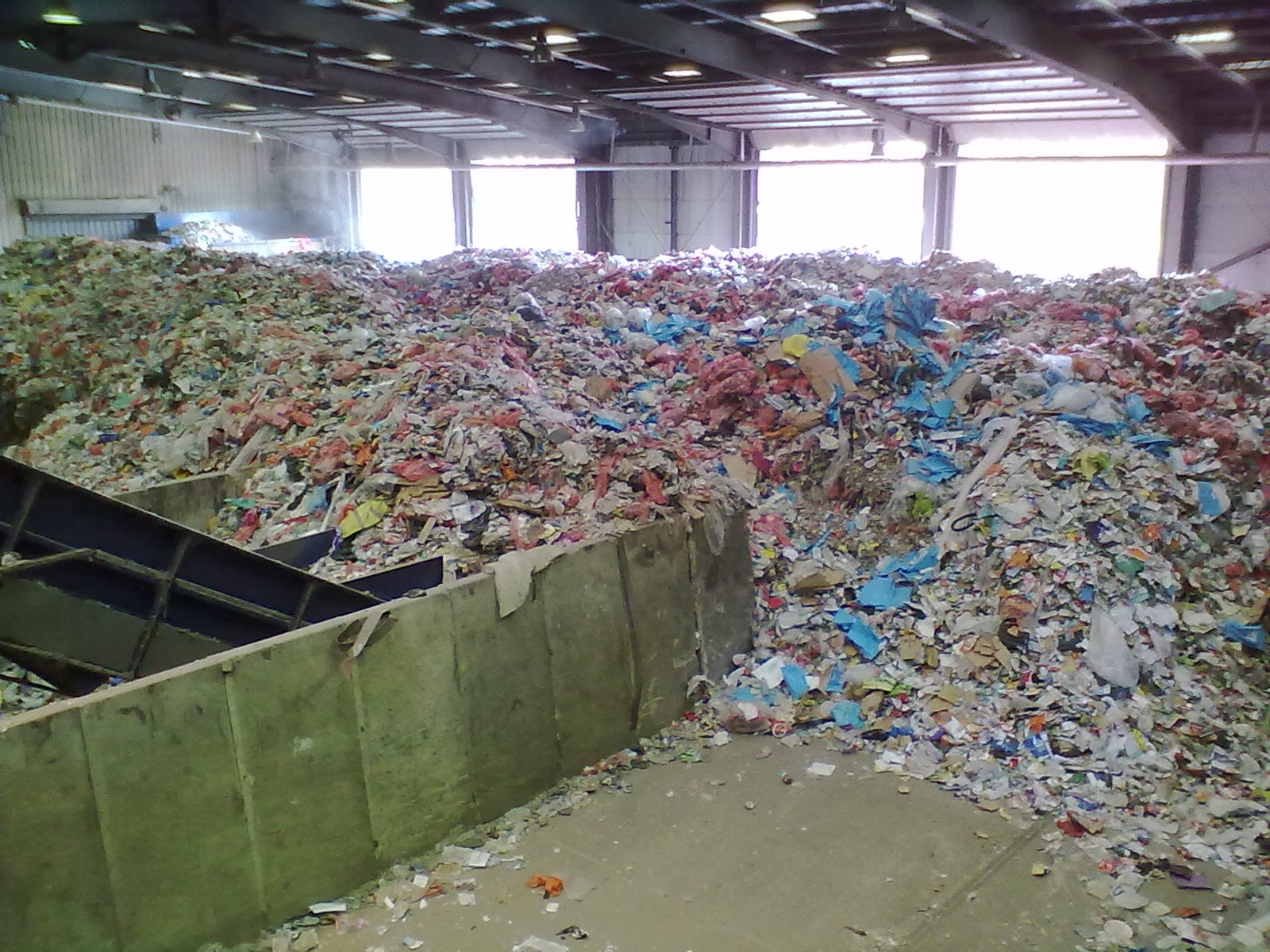 I know people always say this, in this situation, but I have NEVER seen such a huge pile of waste.

The lorries unload it at the open bay doors, and it gets shovelled forward by tractor-type vehicles, into those slots you can see on the left.

At the front of each slot is a conveyor belt, carrying the stuff upwards into the plant.

To give you an idea of scale, the blue bits are full-sized bin bags, and that wall would be way above my head.

The first level of sorting occurs automatically - strong magnets remove metal, then lighter material ie plastic, and cans, are split from the heavier stuff, glass is sorted from the paper, and so on. 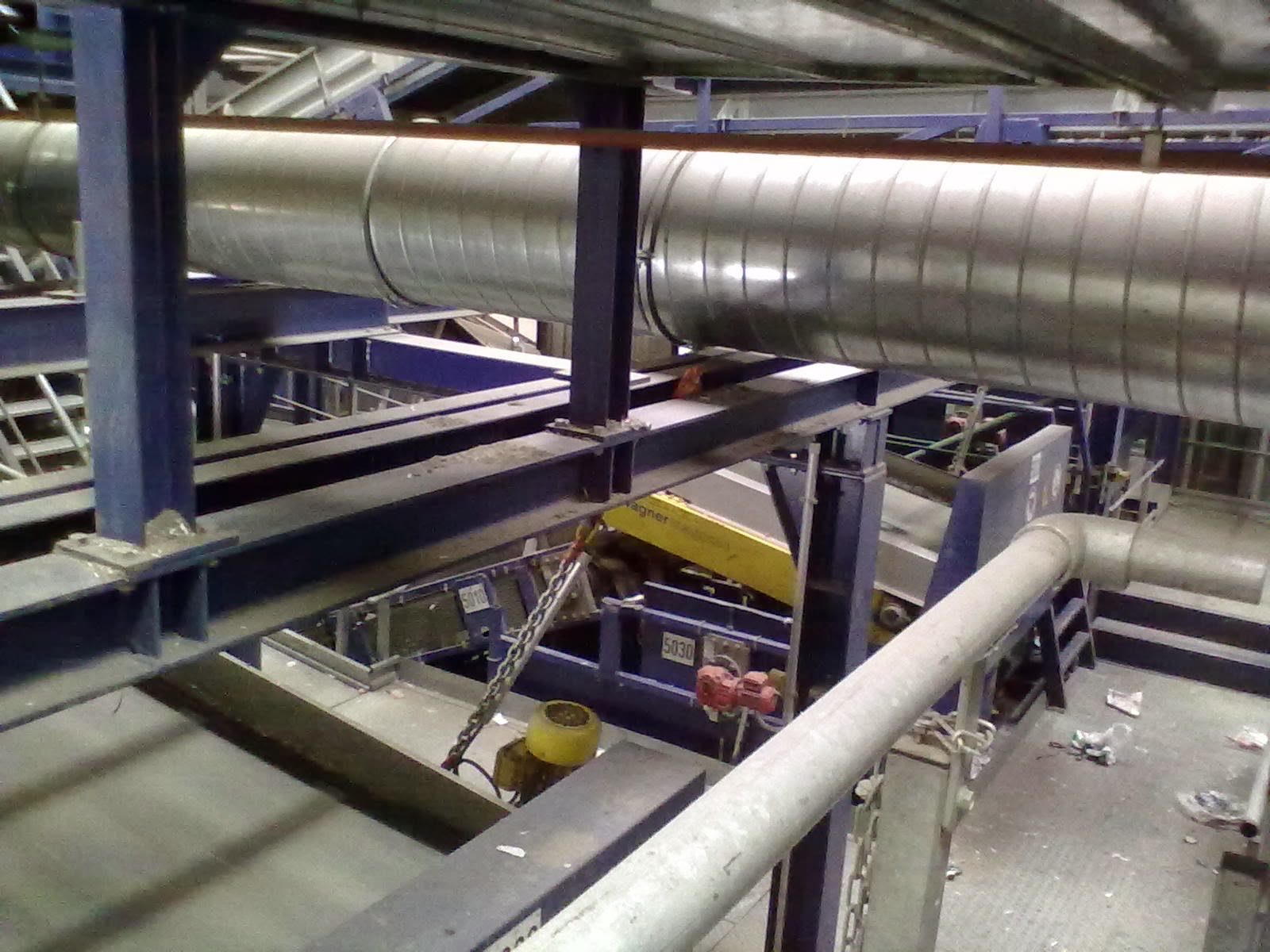 As you would expect, the inside of the building is a monumental jumble of conveyor belts and noisy machinery.

Our tour guide (it was so noisy that I never did catch his name) told us that this facility had been built inside an existing warehouse, which was more or less square. If they had been building from scratch, they would have built a long thin shape, which would have made processing easier.

But as it is, they have had to fit the machinery in to the space they had, hence the apparent confusion and the multiple levels of conveyors. 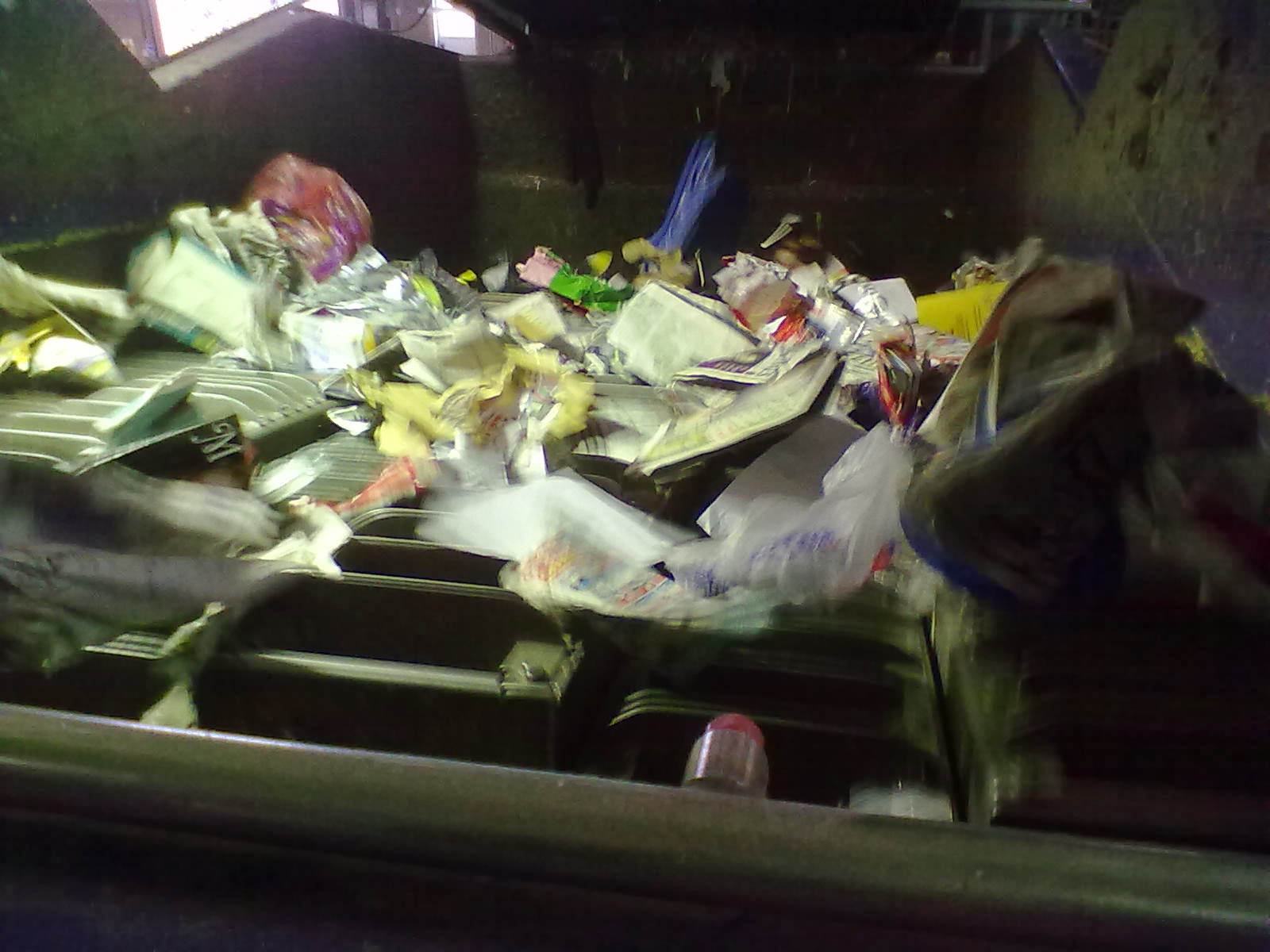 This machine was captivating -  when we arrived, it was inactive, and seemed to contain just a steep row of gigantic metal teeth.

When it started, the noise was enough to make most of us jump!

I'm standing on tip-toe looking down into it (probably breaking any number of health and safety rules)  to see what it's doing - it's "jiggling" at high speed, which causes the lighter items - plastic bottles  - to rise to the top, while the slightly heavier cans are spat out the bottom. 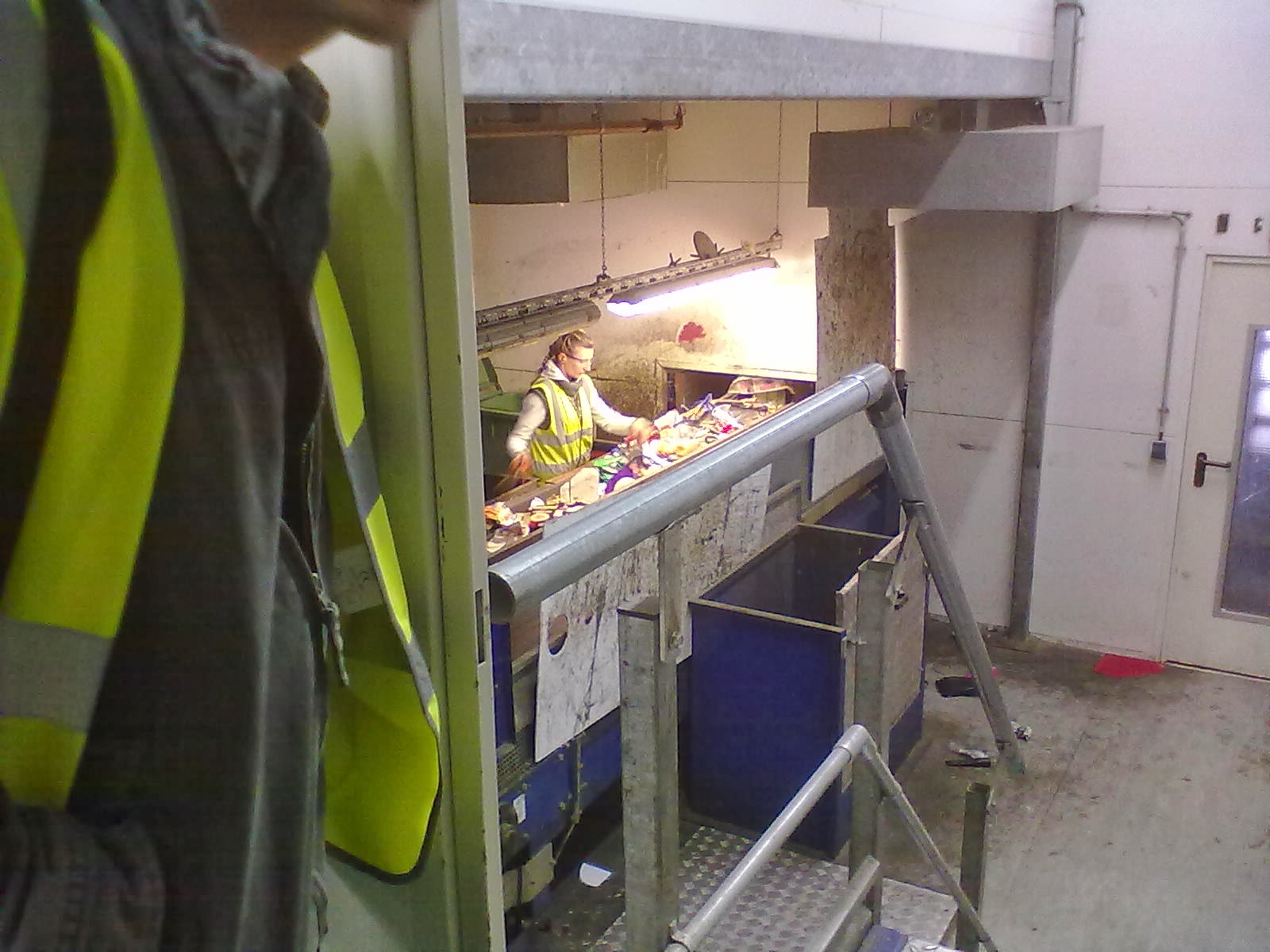 Much to our horror, the next thing we saw on our way round the site was a human!

Yes, we expected it all to be machinery and conveyor belts, but almost at once we went through this sorting area, which deals with items that don't fall into the initial sorting categories.

They are mostly non-recyclables like food,that have been wrongly binned, and which have to be pulled out by hand.

Yes, she's wearing thick gloves, but it's still a disgusting job, and this area was pretty smelly. All the instructions from our various councils clearly state that the recycling bin is not for organic matter, but some idiots always think they know better - or perhaps they just don't realise?

But it does matter, for two reasons: one is that the people who work in the recycling plant don't deserve to have to work in a stink. The second is the obvious one - RODENTS!

Oddly enough, the workers don't mind rats, or birds - they consider them to be just wildlife, and quite interesting to watch, which is a refreshing point of view. But the problem is that the locals complain about it to the council, who then have to come round and inspect, and insist that poison is put down, which means they have dead rats and birds to deal with, instead of live ones.

So please, wash out your tins and cans before you bin them! You don't have to waste hot water on them, just put them to the side of the sink and rinse them in the used washing-up water before you tip it out.

So, back to the tour: after gaping open-mouthed at the seething mass of conveyors and sorting machines - including a really clever high-speed plastic sorter, which appeared to work by magic - we went round to the hand sorting areas.

Here we found the classic idea of recycling - long conveyors, lots of women standing to each side,  watching the flow with eagle eyes and pouncing on the contents, dropping them into various chutes. 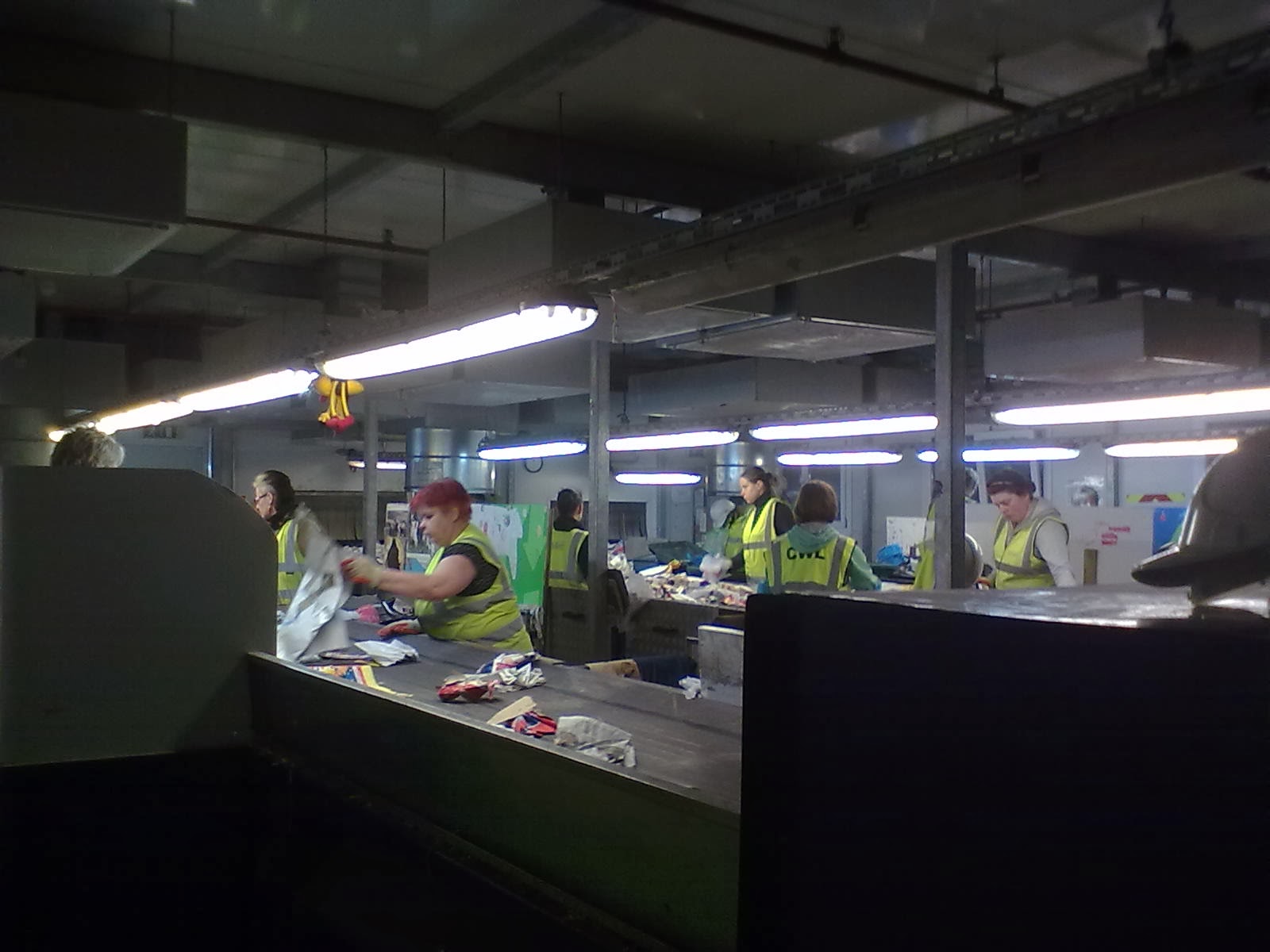 I assume that they take it in turn to be at the first position (lots to choose from) the middle positions (a bit humdrum, perhaps) and the last position ("It's all up to you!").

It was far too noisy for them to talk, and when we left the area I asked the tour guide what the level of staff turnover was.

When I expressed surprise, he told me that although the job itself might be fairly unpleasant, they had a very good social life.  Every single one of the sorting employees were Polish - I had earlier spotted that every noticeboard had duplicate notices in Polish, so I had guessed that there would be a lot of them, but I had no idea it would be 100%. Or that they would stay so long! - and working there meant that they were inducted and instructed in their own language, while being given the chance to learn English, and to settle into a nice English suburb.

Finally we were at the end of all the conveyors, and watched the plastics output crawling continuously off the line, as workers chopped it into pallet-sized bits, tied it up, and sent it out to the yard, not failing to hand-pick out any odd bits of non-plastic that they saw. 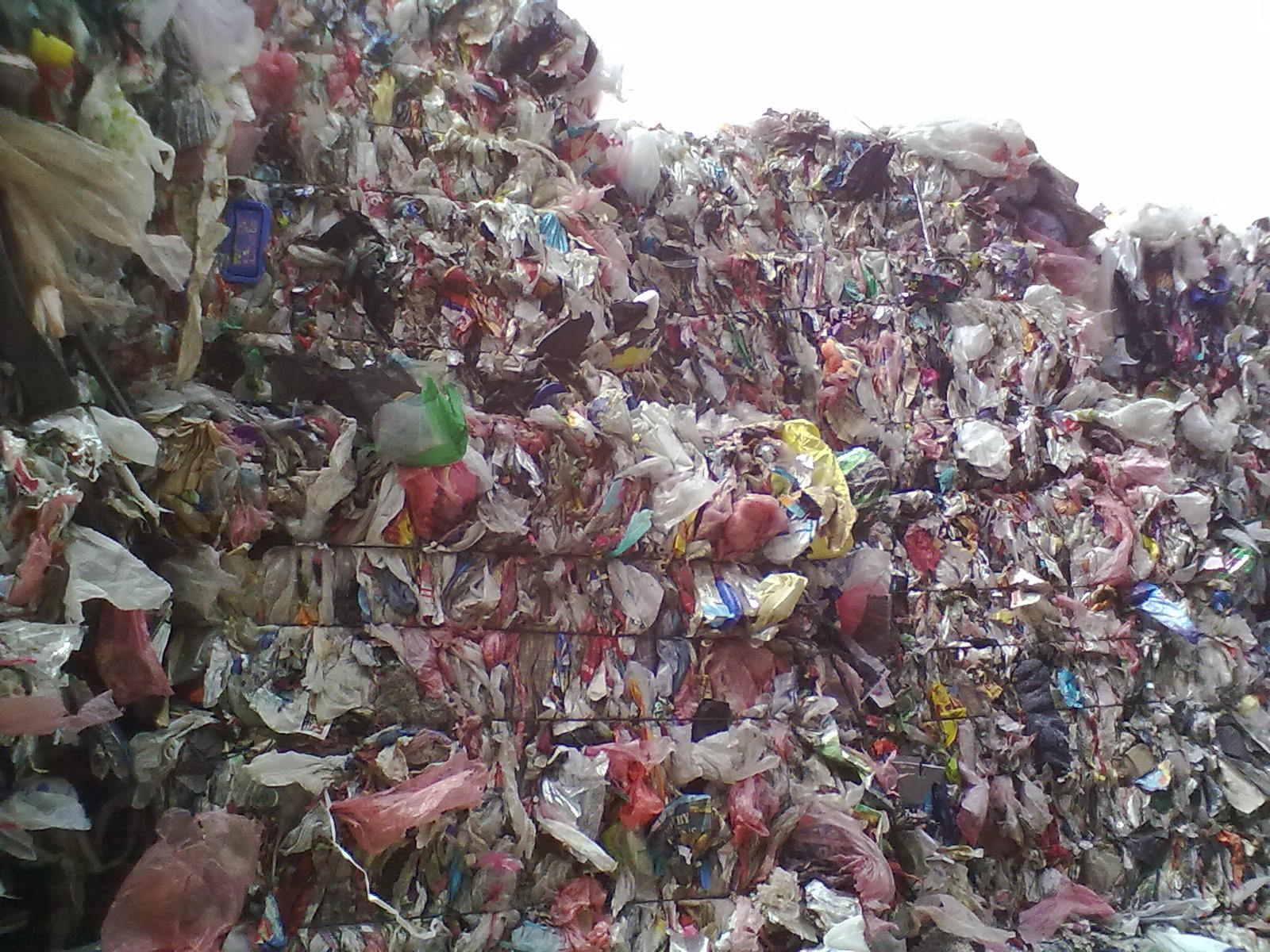 Apparently this material goes off by boat to China for processing.

Again, the natural response is to ask why it can't be processed here, and again the answer is money.

China will accept bales of plastics which are something like 95% pure plastic.

The UK plants will only accept 100% pure plastic.

It would cost a lot of money to ensure the level of intensive sorting that would be required to remove every particle of contaminant.

So it's more cost-efficient to get a slightly lower price for the product, and to ship it to China, than to improve the sorting procedures to hit the 100% level.

It was most amusing to hear the waste constantly being referred to as their "product", but of course it is - the plant does its best to raise enough money from selling the various sorted products to cover the cost of running the plant.

And this is in all our interests - otherwise we will have to pay more in Council Tax.

So what lessons did I learn from this outing?

Rinse out your cans and tins.

Don't squash one type of rubbish into another - don't fill boxes with plastic then put the whole thing in the bin.

Don't tie up like-for-like rubbish: someone has to manually cut your string and then put it in the landfill pile. Just pile it into your wheelie bin.

So there you are - I now know what happens to all my rubbish, where it goes, and how it is processed!

Posted by Rachel the Gardener at 11:11