Ah, the lovely West Green House gardens! One of my favourites, down in leafy Hampshire, not far from Basingstoke.

Yesterday, having an unexpected free afternoon, I went along again to see how much has changed, and to see what it looked like at this time of year.

It's not terribly well signposted - I mean, you have to know it's there to get there, if you see what I mean, but it is well worth finding your way through tiny lanes and sweet little villages: talking of which, I very nearly screeched to a halt at Dipley village, going over the little hump-backed bridge, and getting a sudden brief glimpse of this - 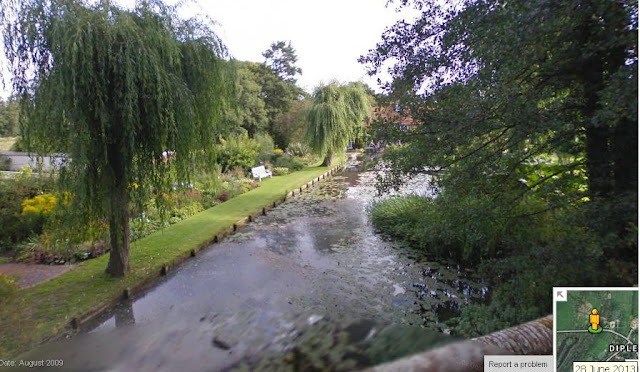 with thanks to Google street view - no, I certainly didn't take a photo while driving!!

Isn't that lovely? I've just googled it, and it appears to be Dipley Mill, which is open a couple of times a year under the NGS scheme; the next opening is July 21st, and I have put it in my diary... so you might see me there!

Anyway, just a little further down the road is West Green House, and the garden was once again, quite lovely.

The day was not brilliant:  not raining, but quite overcast.  As I've said before, I personally rather like visiting gardens in the rain - well, light drizzle at the most, I draw the line at downpours - as the colours are all fresher, the scent is often stronger, and best of all, it keeps away all but the most hardened garden visitors, so you don't get swamped with screaming children,  and the few other visitors are usually keen to talk about the plants.

I didn't spend much time in the Alice in Wonderland courtyard garden, as it was full of people sitting at the tables, which was a bit off-putting. Not because they were there - after all, the tables are there for people to sit at! - but because instead of talking to each other and facing inwards around their tables, these people were all facing onto the garden, as though watching a play. It was quite strange, and I wasn't quite brave enough to walk right out in front of them to look closely around the topiary, as I normally would.

So I went straight into the Walled Garden, and I have to tell you, it was looking most impressive. Well-kempt (good work, Gareth!), impressively striped lawns, and lots and lots of really good topiary, which is, of course, a big interest of mine. There was also a very interesting approach to colour co-ordination: not slavishly sticking to any one colour, but there was a definite feel, standing in the middle, that over there was mostly white, whereas over there (the opposite corner) was mostly dark red... all very nicely done.

In what was possibly the Blue corner,  I was particularly struck by some really odd-coloured roses: 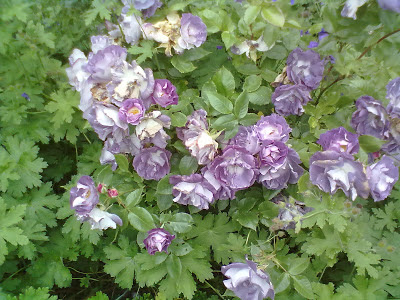 Errrr, I have to say that I would describe them as eye-catching, rather than attractive. Rosa "Dirty Blue", maybe? Further round the border there were more, similar, but darker. Possibly Rosa "Dusky Dirty Blue".

I did wonder if, in the spirit of the Alice in Wonderland garden, they had been painted...but of course, if they had, they wouldn't be in the main garden, would they? No, I think they were natural. A quick google indicates that "Blue Moon" is the foremost of the blue/lilac/mauve coloured roses, so it may well have been that rose, or something similar.

Although I could quite happily have spent a lot more time wandering around the walled garden, at that very moment two of the overseas gardening students/volunteers (well, they weren't speaking English) chose to get out the petrol hedgetrimmers and ruin the peace of the afternoon. So I beat a hasty retreat, round the top of the formal garden, and headed out to the water garden.

Despite the noise, I paused to admire the Folly Wall - I expect they have a different name for it, but it fulfils the function of a Folly by being built just to provide a focal point across the garden, and originally to be the source of the water flowing through the water garden.

The fountain wasn't fountaining today, but I am pretty sure it was last time I visited, and I did wonder if it had suffered some damage through the winter, as it seemed as though part of the decoration above the fountain's basin had fallen off.  Do I mean fountain? Or do I mean spout? You know, a carved face on the wall which spits out the water into a basin below, which then flows out into the water section.

Anyway, today I noticed something which I had missed last time: the wall is actually a wonderful trompe l'oeil work of art. For a start, if you look at the picture below, you would swear that it's three dimensional, like an alcove. But it's not, it's a flat wall, and the columns are in very shallow relief, only an inch or two.

Secondly, you would definitely say that it's a sunny day - just look at the shadows. But they are painted. It was a dull, overcast day, and the shadows are painted. 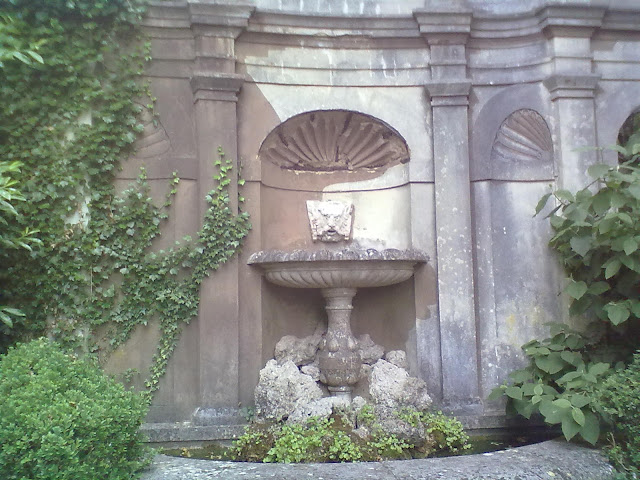 Fantastic, isn't it? I have to say, looking at this photo, it fools the camera even better than it fools the eye!

Moving through the fernery, out into the Water Garden (not spoilt this time by screaming children), pausing again to wonder if the two halves of the water channels are connected or not... round up onto the top edge of the garden, along the windy serpentine stream path, now looking very well established, with lots of ferns, iris, and a series of very nice bridges. By the way, that's "windy" as in winding, not as in blowing the hair about.

A fellow visitor was making disparaging remarks about leaky ponds, so I was quietly pleased to be able to tell them that the "stream" is actually there to accommodate water draining from the fields above, so in summer it tends to dry out. I knew this because I had spoken to Marilyn, the garden's owner, about it last time I was here, and she had explained about the winter flooding that used to cause problems there, until she cleverly came up with a design that made a necessity into a stylish addition to the garden.

Onwards leads the path, into the newest area of the garden - an "edible hedge" in two graceful curves, which is a lovely way to liven up an otherwise fairly dull transitional path along one edge of the garden. Then onto the woodlandy part of the garden, with a quick diversion up around the lake to check out the variegated poplars, which always intrigue me: 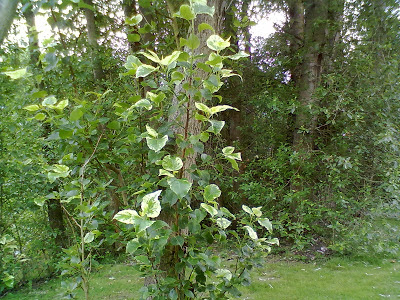 I'm getting more and more interested in variegated foliage, the more I see of it: I know a lot of people dislike it, saying that it looks diseased, and I can see their point, but I'm beginning to appreciate the breaking up of a mass of green foliage, firstly with purple foliage (I am currently nurturing a batch of purple-leaved Hazel seedlings) and now with variegation.

This one is, I think, rather nice.

While there, I noted that the grass had been left to grow long this year, around the base of the trees: quite a small area, but I found a small colony of Common Spotted Orchid (Dactylorhiza fuchsii), along with Ragged Robin (Lychnis flos-cuculi), sundry Meadow Buttercups, etc. Yes, *shakes head* having paid money to visit a garden, I was on my knees, looking at the wildflowers. Sigh. *laughs*

Heading back down to the shady woodland section, I was just about to investigate the various follies and grottoes, then aargh! The horrible sound of a strimmer!

I am sure that I have mentioned this before, at another NT garden, but really, having paid entrance money, I get really cross when power tools are used. This garden is open 11 to 4.30: in my view, that leaves plenty of time for staff to use power tools before and after opening, NOT during.

Yes, we all appreciate that work has to be done in order to keep the gardens as nice as they are, but please, not while we, the paying customers, are trying to enjoy them. If work really needs to be done, which I can appreciate, then for heaven's sake, be eco! Use shears! Use a scythe! (more of that later.) The sound of shears clip-clip-clipping is positively restful, and scything always attracts a fascinated audience, whereas the shrieking whine of a two-stroke engine at full bore just brings pained expressions to the faces of all the visitors.

Did I say anything to the nice lady on the till as I stomped out in high dudgeon (which is a small village near to Lowered Brow in the county of Grumpingtonshire)? No, I did not. What's the point? She would only say "but you expect the work to be done" and "it's quick" and, possibly,  "no-one else has ever complained".

Maybe I'll send them an email, politely mentioning it. Maybe.

Posted by Rachel the Gardener at 10:54