Banks are always a problem, when gardening: rain erodes the soil, while failing to actually water the plants, and it can be really hard to get a good coverage of plants going.

In my experience, if terracing is not an option, it's best to get the shrubs in first, weeding around them until their roots are strongly established: then it's easier to get the understorey planted, once the shrubs can protect the smaller plants from rain.

But I like a challenge... and I have one garden which regularly presents me with a specific gardening challenge, that being how to establish new plants on what is basically a one-in-one slope.

It contains a lake (yes, I'm lucky enough to work in a garden with a lake) with steep banks virtually all the way round, as the lake is set in a deep valley. These banks are very steep, in places being more than one-in-one, which means that gardening on them is a bit tricky - I slip and scramble around on them like a mad thing, and I have been known to tie a rope to the barriers up above, in order to have something to hang on to. Not quite abseiling, but the same principle.

Over the last year we have had two rather different problems with the banks: today I'll focus on the Road Bank.

Back in March, we decided to tackle the problem of the north-facing bank, known as the Road Bank: there is a road up above, where people used to stop to admire the lake. I say "used to" as it has become very overgrown in the last couple of years, and the mature cherry tree suddenly sent up dozens of suckers. These have become hefty young trees, giving the brambles something to wind around and forming an impenetrable mass. 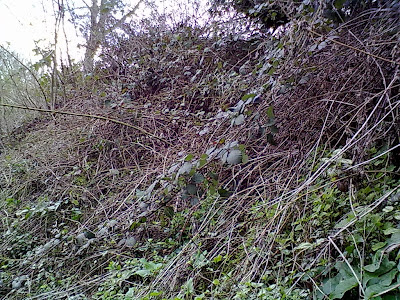 Here's a snap taken back in March, from a precarious perch towards the top of the slope.

As you can see, not a lot of planting remains, just a mad tangle of brambles, and some uninspiring Lamium.

Part of the problem is that the bottom of the slope used to have a two-foot high wooden edging to it, marking the end of the slope and the beginning of the lake path. Three years ago, this wooden edging was rotting away to the point where I could no longer climb up over it safely in order to get up the bank to weed it.  Well, two years later, the edging was pretty much gone, and the brambles had well and truly taken over the bank. 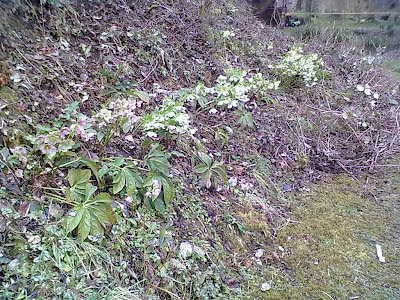 Here is the bottom of the bank, and the line of Hellebores - photo taken in March of this year - showing how the original bottom terrace edging has crumbled away to nothing, so the bank now slopes untidily down onto the path.

The path is about a yard wide, then it slopes down again into the water.

Not the best place to fall down!

So I was sent up there with a machete to clear off the brambles, chop down the cherry suckers, and then to dig out as many of the bramble crowns as possible.

You might remember that I wrote about Bramble Removal back in March, and this is the large area to which I was referring in that post.

Here is a section of that bank after bramble removal: first stage, chop off the mile-long razor-sharp top growth. Second stage, carefully dig out every bramble root that I can find.  This reveals the bare bank, and the number of cherry suckers. I left these until last, so that I had something to cling to and lean on while I was de-brambling, in case you are wondering. 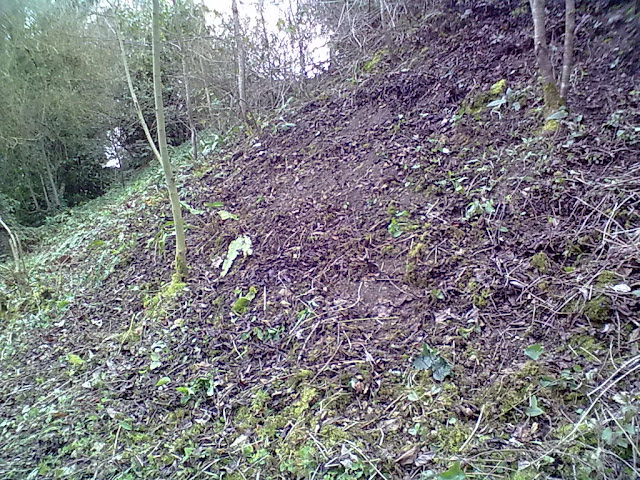 Once I'd reached this stage, I chopped off the cherries, leaving their roots intact to hold the bank together, and in some cases leaving a short stump to assist with scrambling about on the bank to weed it - I have been up the bank several times to weed it, this summer, and it really helps having odd anchor points.. It's been massively frustrating having so much rain, as the bank has been slippery: and yes, I did tumble down it at one point, doing an impressive version of the splits en route. I still feel it in that leg muscle, to this day...

In May the client and I agreed it was time to get on with replanting, so we bought in what seemed like a lot of plants, until I started planting them, when they all disappeared against the scale of this bank. But we saved a lot of money by taking sections from other plants in the garden wherever possible, and several of my other clients kindly contributed off-cuts or thinnings of their plants.

That's one of the things I love about my clients, they are all so willing to donate plant material to each other!

We planted all the things that we knew would do well:  anything that had survived, anything already growing in the garden, and anything we could get for free. This included a lot of Cotoneaster (species unknown) seedlings, weeded out from another garden. They are very good at binding a slope together, and provide a light canopy which helps to suppress weeds, while also having berries, and often good autumn colour.

We scrounged as many Hellebores as we could from everyone in the village, along with bought-in plants such as Asarum europeum for ground cover, lovely glossy kidney-shaped leaves pretty much all year round:  Liriope spicata "Alba", again a good ground-coverer, with pretty white flowers early in the year,  and some Luzula sylvatica "Aurea" which is a golden woodrush, it has bright acid-green to yellow foliage pretty much all year round, and is excellent for planting as a "river" through a mixed herbaceous border. Up on the bank, I hope that it will spread quite rapidly, as it gives a bright glow even in the depths of winter, and doesn't require any maintenance at all. Part of my cunning plan to reduce the amount of time I spend scrambling around up there!

By summer, the brambles were growing back so I went a-scrambling again, this time armed with glyphosate weedkiller, so we'll see how well that worked: most of the plants were settling in well, and the client and I were amazed at how well the ferns were doing: being covered in brambles, we hadn't realised quite how many ferns had survived the neglect, and when I checked it last week, they were huge! Presumably they have enjoyed the wet winter and spring, combined with considerably more light than in the last few years.

Posted by Rachel the Gardener at 09:36