Bramble removal: How To Do It

I've given this lecture twice in the last week, so I thought I'd be generous and share it with you guys.

"Given this lecture" did I say? How pompous! "Explained this principle"  might be better. Or shall we say that I have been asked about removing brambles correctly, and this is the advice and information that I have given out.

Brambles - don't you just hate them? They grow faster than almost anything else in the garden, they have evil sharp skin-slashing thorns, they tip-root themselves everywhere, and, as a final insult, at the end of the year, instead of dying down and rotting away, the canes solidify into tempered steel with titanium thorns, linking themselves into huge mats specifically to prevent us from getting at the roots to remove them.

OK, for a couple of weeks in late summer/early autumn they are laden with delicious fruit, but come on, the rest of the time they are a complete nuisance. Especially if they are in your garden...

In  my experience, there are two "types" of bramble problem.

First and most often found, are the ones which have rooted themselves in cracks in walls or paving, and which sprout a fistful of thin spindly shoots every year. They trip us up, scratch our ankles, and although we chop them right off at the ground, they still come back within a few weeks to annoy us again. They rarely fruit, so they aren't contributing anything, just being a nuisance.

The second type are the "real" brambles, great thick squared-off stems, miles long, covered in lethal thorns and forming an impenetrable forest, not to mention the long arms, waving in the breeze and lunging at any unwary passer-by. These are indicative of brambles that have been allowed to run wild for a couple of years or more.

Here's the botanical bit: both "type" are the same plant, Rubus fructicosus agg, or blackberry, or bramble. Yes, bramble and blackberry are the same plant. There are many closely-related sub-species or micro-species of blackberry, so it is known as an aggregate species, hence the agg at the end.   There are many specially-bred garden cultivars or species, bred for flavour, for early cropping, and for size of fruit. (Which, incidentally, is not a "berry" at all, botanically speaking, it's an aggregate fruit consisting of a number of drupelets. Fascinating, huh?) And there is even a selection of thornless varieties, and personally I can't understand why anyone would want to grow a thorny one, when they have the option of being thorn-free with the fruit being just as tasty.  In my own garden I have thornless blackberry, and they are the ones that I sell.

Blackberry or Bramble? It's completely your choice - I tend to use Blackberry for the ones grown for fruit, and bramble for the vicious escapees that I get asked to remove.

Now a quick word about their life cycle: it's a perennial plant, which means it grows back year after year from the same root. But it's a biennial cropper. Biennial means "in a two-year cycle". So in the first year, it sends out lengthy leafy growth in all directions, but no fruit. In the second year, these year-old shoots or canes produce little side-shoots which bear the flowers and therefore the fruit. After fruiting, these shoots die and become the brown tangles that we hate so much.

If you are growing blackberries to eat, you need to "manage" them on a two-year cycle. Generally, this works best if you grow them against a wall, or if you build some sort of post-and-wire structure so that you can tie up this year's shoots to the bottom rung, and last year's shoots to the top rungs, for the best sunlight, and for ease of cropping.  After harvesting, you chop out the fruited shoots right down at the base, then move the fresh shoots up to the top rungs ready for next year. As the new shoots grow, you tie them in to the bottom rung. It's important to keep them off the ground, otherwise the tips will root and make new plants. Which is fine when you want to expand your crop, but it does reduce the amount of fruit, and how many new plants do you actually need?

Right, now we understand the life cycle of the bramble.  But, I hear you say, we don't care about its life cycle, we just want to get rid of it.

"Type 1" spindly weedy things. Cut them off at ground level, using a knife if necessary to slice through the brown knobbly root part. In 2-3 weeks' time, go back and look for new leaves. Spray new leaves with Glyphosate weedkiller: the brand name used to be Round-up but it's out of patent now, so you can buy "own brand" types. Go back in another week or so, spray foliage again. Repeat until it stops reappearing. At that point, you may be able to prise out some more of the now-dead knobbly root part. For the rest of the year, keep an eye on it, and if it dares to make any new leaves, spritz them with the Glyphosate again.

Typically found when moving into a new garden, when taking on a new allotment, after being ill for some time, when expanding the garden, or when suddenly developing an interest in your garden after ignoring it for several years. Also found pretty much all year round when working on restoring your local canal. Which I do in my spare time. ("Spare" time! Hollow laugh!)

The first job is to get rid of the top growth so that you can get to the roots. Best option: hire a man with a brush-cutter (a strimmer on steroids) to chop it into small pieces so you can rake it up and burn it. What's that? You can't do that? OK, in that case put on stout clothes, get your thickest gloves, a rake, and a pair of secateurs. Get as close as you can to the tangle, and start cutting out sections. Don't overstretch yourself, just cut everything you can reach, and if you cut it into pieces 2-3 feet long, it becomes a lot easier to get rid of it.

When you work your way as far as a root,  leave a foot or so of growth so that you can find it later.  There's no need to cut it down to ground level, just to clear it enough that you can move around the area without being tripped, snagged and scratched.

Continue doing this until you have eaten you way through your bramble thicket.

You should by now be tired, sweaty, scratched and cross, and ankle-deep in bits of bramble. Well done! Rake up the bits and dispose of them.

Right, phase two. You can now tackle the roots. If you don't, they Will Be Back.

Now, here's the useful thing to know about bramble roots: they don't sprout from ground level, as normal plants do: they sprout from just below ground level. This is what catches most people out: they chop off the top growth, right down to the ground, then wonder how it keeps re-growing. This is why Type 1 are so persistent: when growing in paving or in cracks in walls, you simply can't get to the growing point, hence the instruction to use Glyphosate, which is a translocated weedkiller, meaning that it doesn't kill the leaf that it lands on: it penetrates the leaf, works its way down the stem to the root, then kills the root. Yay for Glyphosate! 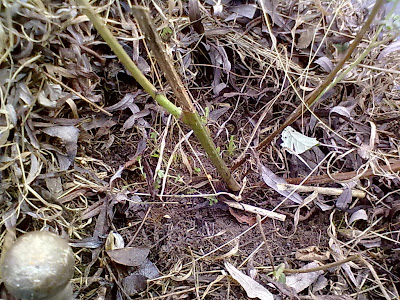 Right, class, are we paying attention? Sit up straight, no fidgeting, here we go.

Here (right) we have a typical bramble:  it has the green shoots which bore fruit last year just starting to go brown, and some brown dead canes from the year before. This is, by the way, a fairly spindly example of the type.

First we clear away the leaf litter around it, to see what we have. To avoid being spiked in the eye, at this point I generally chop off most of the shoots.  There are no buds to be seen, but it would be a mistake to simply chop it off at ground level. 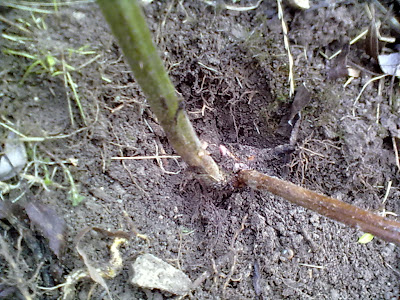 This is the same bramble, now reduced to just a couple of the shoots  - it's often useful to have something to get hold of, plus if you get called away half-way through, it's handy to be able to find them again.

I am now scraping around at the base to expose the roots. You can see that I've dug down a couple of inches, that's all. Not much more than scraping away the surface soil, really, and done on hands and knees, with a small hand-digging tool.

Right! There, can you see it? A  nice pink bud just visible, in the junction between the two remaining stems. 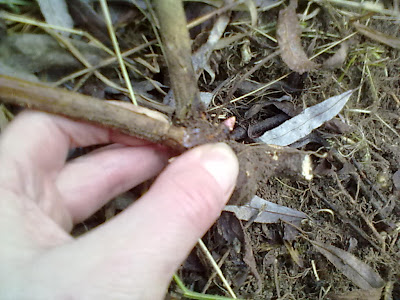 I can therefore cut off the root below this point.

Here's the cut-off root: you can see that I've cut it about 2" down - the white cut end on the right -  and now you can clearly see that pink bud, just above my thumb.

Apologies (as usual) for the quality of the photos, taken in haste with my camera phone, which does not have a macro setting, unsurprisingly. 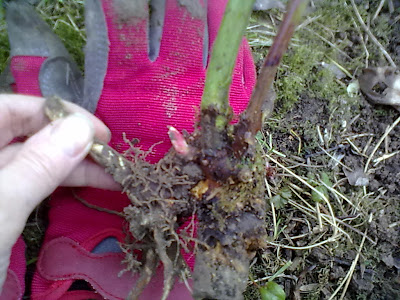 Here's a different bramble root from the same section of garden: again, a lovely plump pink bud springing up from well below the surface level, and which was completely invisible when I started to remove it.

In this case, I managed to get several inches of root out as well, but the important part, the vital part, is to get below that "crown" or growing section from which these buds spring.

So I hope you can see from this that removing brambles is not impossible, and you don't have to dig out yards and yards of roots. Just ensure you dig out the bit with the buds on.

And when you have cleared your former jungle, it is worth going back every couple of weeks to check for new growth: if there have been brambles there before, there will be bramble seeds in the soil, and although you have carefully removed all the monster plants, you will continue to get new seedlings for some years. Tiny ones are really, really easy to get out - many of them will even just pull out, if the ground is soft - and it is so worth while to keep on top of them, having put in all the effort to remove the big ones.

I'm currently clearing a huge area of brambles for a client, so maybe next week I'll have some before and after photos to show you what can be done.

And I have added a couple more posts about brambles, if you want even more info on this subject:

Brambles: Part 7: The Right Tool For The Job. Secateurs, mostly.

Bramble Removal: Invaders from Next Door deals with this particular issue.

What Shrubs Can Hold Brambles Back  was an interesting question.

Posted by Rachel the Gardener at 09:29