New additions to the Yard

As mentioned, my water tank is holding water beautifully.

But it's also holding a lot of mosquito larvae, which is not a good thing!

I read somewhere that the Victorians used to keep goldfish in their water butts to eat the bugs, so I thought I'd do the same.

The garden centre were clean out of goldfish, so I bought the smallest Golden Orfe they had: 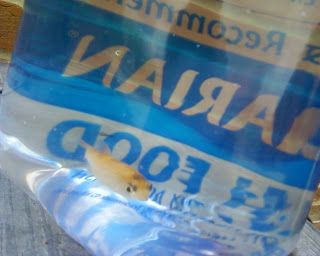 Here he is, looking rather glassily at us from his Transport Module (ie plastic bag).

When, in due course, he was released into the tank he immediately shot up and down it at high speed, apparently overjoyed by the huge amount of food waiting for him.

He was christened Bram Tanking, and spent the rest of the day tanking up and down the length of the tank.

Next morning, I anxiously checked if he'd survived the night. Yes! He had! The tank has a small covered area at one end, where the intake valve used to be, and this provides a useful "safe" area where he can go and hide.

However, he wasn't tanking  up and down as much,  and I wondered if he was a bit lonely. Do fish get lonely? Well, it's a huge tank compared to most fish-tanks, so I thought I'd get him a friend or two.

A few days later, I added two ordinary fat red goldfish to keep him company, and they have had a lovely time since, chasing each other up and down.

I've also added a few more benches: my friend Jim, who helped me with the lean-to, brought me some old scaffolding planks that were too far gone to be of use, but which he thought might be all right for standing plant pots on.

They were fairly well rotted, and wouldn't be any good for making raised beds - which is the normal fate of old scaffolding planks these days - but I think they'll last a year or two here.

So I got out the rusty wheelbarrow and trundled round some more old bricks: luckily there are large piles of them lying around the farmyard.

"Cracking, Grommet!" as they say.

Propped up on piles of bricks, they make three good big benches, don't you think? 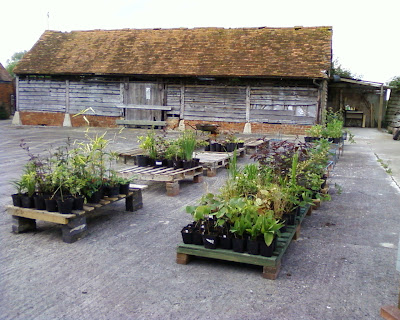 Here's the situation to date: two rows of benches well on the way to being filled, lots of room yet for expansion.

So far the bunnies haven't penetrated my netting, although I have found a couple of weak spots in it.

The bunnies seem to be mostly out in the main park area: perhaps they just haven't noticed the plants yet.
Posted by Rachel the Gardener at 15:36