Heavy rain overnight meant a delayed start: I put off my morning job until the afternoon, by which time the increasing wind - for that, read "howling, blustery, wind" - had done a good job of drying things off.

While doing the rounds of digging, lifting, splitting and replanting, I suddenly noticed that the dear old Pear Lady under the mulberry tree was very nearly gone...

"The Pear Lady?" I hear you ask, visions of an elderly fruit-collector breathing her last.. no, it's a statue, one of several in my client's garden.

She's called the Pear Lady as she was sculpted from pear tree wood, and she is - was - a tall, elegant female figure, very twenties in style, with a flowing gown.

When I first came to this garden, some five or six years ago, one of my regular jobs was applying Teak Oil to the sculpture, but about three years ago she started showing signs of woodworm, and since then it has been a bit of a battle. 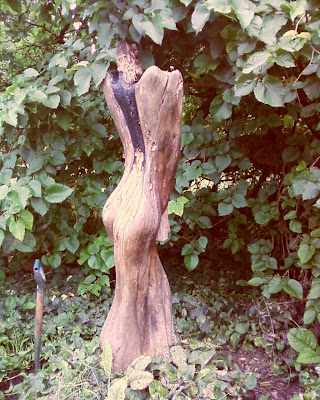 Here she is back in 2009, this is the first photo I have of her, and alas, she's already lost most of her head.

You can see her general scale from my fork, stuck in the ground to her rear: she's taller than I am.

We'd tried special varnishes, we'd tried all sorts of woodworm treatment, but nothing seemed to work, and she's been gradually falling apart.

Of course, once the head went, it was easier for the rain and weather to get inside her.. 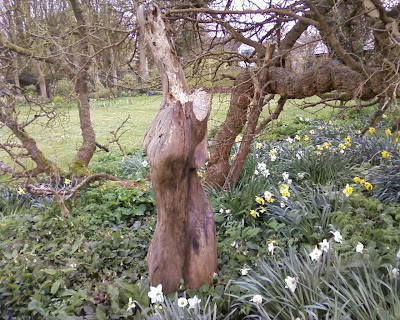 So here she is as seen today.

And of course she's not replaceable, having been a one-off work. It's not as though you can ask a sculptor to "knock up another one, exactly the same, please!"  I can just about imagine what a craftsman and artist would have to say to that...

It looks as though another month or two will see her final disintegration, and I'm guessing that by the time the mulberry is in leaf again, there won't be much to be seen. 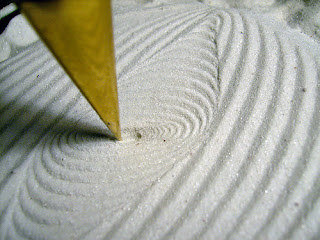 I suppose at some point later this year there might be thoughts about finding a new piece to replace her..

I'm quite keen to see one of these Sand Pendulums in action in a real garden, but I'm not entirely convinced as to how long the sand would stay in place.

Robert Longstaff sell them, with the suggestion that "a sheltered spot in the garden" would work, so it's theoretically possible. I'd just like to see one that's been outdoors for a few months, first...

Well, at the end of the afternoon I popped into Dews Meadow Farm Shop to see if any of my plants have sold: and yes! there was money in the box, so that was a good end to the afternoon.

Actually, not quite the end, I stopped off at the Yard on my way home, having noticed on my way out that the gate was swinging open: not latched back, but just swinging. I'd reported it to the manager by text, but I thought I'd just pop in and check if everything was ok, and to make sure that no-one had taken my hosepipe, which I have left there in anticipation of getting my Agreement, which should be any day now. I hope.

All was well, and great news, the water tank was holding water! About 3" of it, which is very exciting, as all the holes were below that level. This means my patches were successful, and I will be able to reduce my water costs a little by using any rainwater that I can catch in it.

Posted by Rachel the Gardener at 19:55